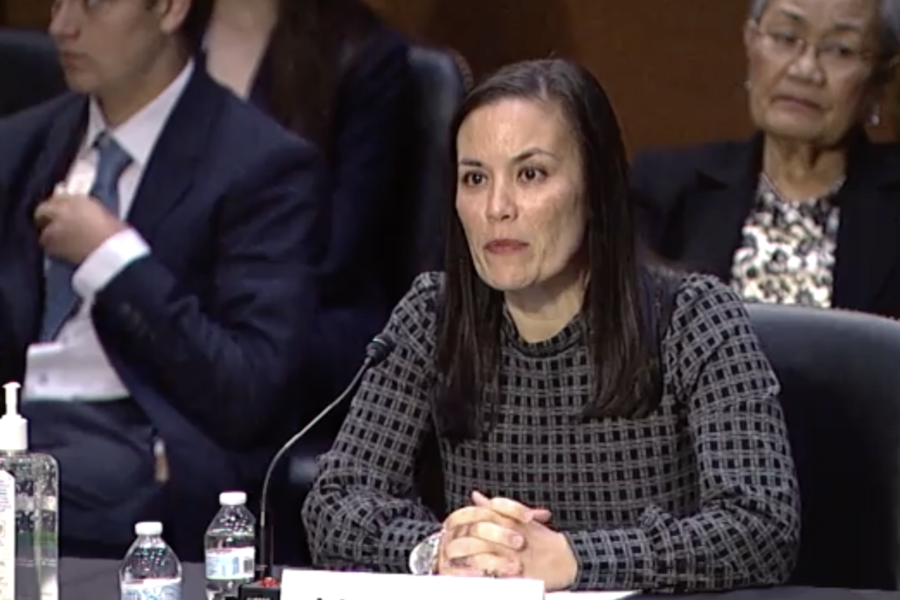 The Senate on July 22 confirmed Gina Ortiz Jones to be the next undersecretary of the Air Force, giving the service a No. 2 civilian leader while the nominee to lead the service remains in limbo.

Ortiz Jones, along with five other Defense Department nominees, were approved by unanimous consent in the Senate. The vote came exactly one month after the Senate Armed Services Committee advanced her nomination.

The other confirmed nominees are:

The confirmations double the number of confirmed leaders within the Pentagon after some nominations have languished for months in the Senate and many positions are without nominees.

During a July 21 press conference, Defense Secretary Lloyd J. Austin III said his team is focused on the process of nominating leaders “each and every day, and we continue to work with the White House to make sure that we have quality and qualified applicants to fill these seats.”

Frank Kendall, the Biden administration’s pick to lead the Air Force, is still without a confirmation vote because multiple lawmakers have placed a hold on his nomination. Sens. Gary Peters (D-Mich.) and Mike Lee (R-Utah) have holds on Kendall, while Sen. Elizabeth Warren (D-Mass.) recently dropped her hold on both Kendall and Shyu after both agreed to extend their ethics agreements.

Ortiz Jones is the sixth woman to be confirmed for the job and the first openly gay person of color to hold the role. She served in the Air Force for three years as an intelligence officer, deploying to Iraq and reaching the rank of captain. She received a master’s degree from the Army Command and General Staff College. She also worked as a civilian for U.S. Africa Command and the Defense Intelligence Agency. In 2016, she joined the office of the U.S. Trade Representative before running for Congress in 2017, losing to Republican William Hurd.

During her confirmation hearing, she cited her uncle, who joined the Navy as a steward, which was one of the only positions available to Filipinos at the time.

“My own service started with a four-year Air Force ROTC scholarship that took me from San Antonio, Texas, to Boston University. I was honored to wear our nation’s cloth. However, similar to my uncle’s limited career opportunities because of his ethnicity, my experience in the Air Force was hindered by the ‘Don’t Ask, Don’t Tell’ policy,” Jones said in her opening statement. “Yet I, too, remained undeterred because of my desire to serve our country. That experience cemented my resolve to ensure anyone ready and able to serve can do so to their full potential, and accordingly, our country’s fullest potential.”