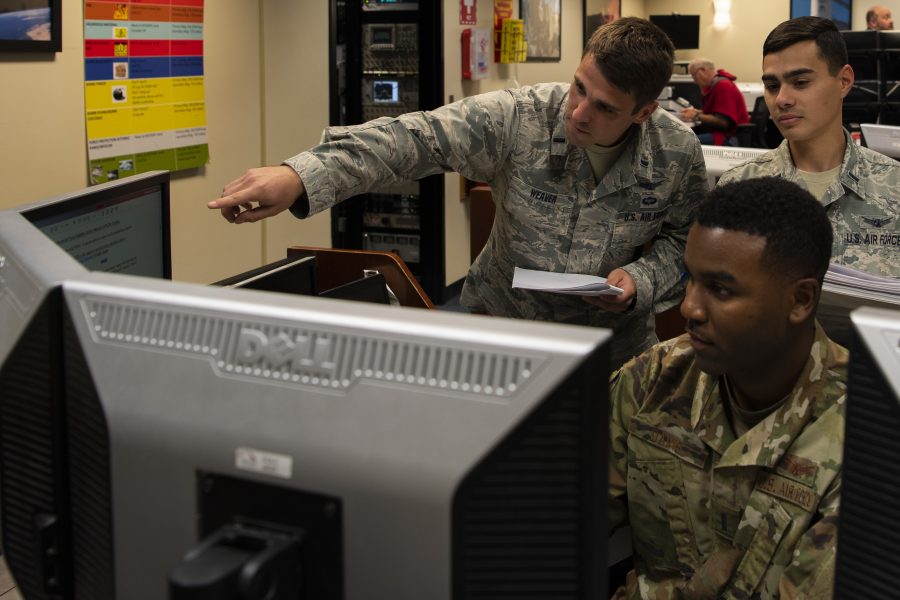 The Defense Department’s coronavirus response is giving the fledgling Space Force a chance to show its skills and shaping how Airmen manage military satellite communications along the way.

Defense Secretary Mark Esper said March 17 the Pentagon had given the Navy orders to start preparing the USNS Mercy and Comfort hospital ships to dock in cities hard-hit by the coronavirus pandemic so that military medical workers could ease some of the burden on regional hospitals. That decision set off a speedy domino effect to not only deploy the ships—sending the Mercy to Los Angeles and the Comfort to New York City—but also to equip them with the connectivity they needed to treat patients within weeks.

“In response to an urgent request from the USNS Mercy for additional bandwidth, a new mission on the [Wideband Global SATCOM] satellite system was allocated, which doubled the data rate for the USNS Mercy,” the Space Force said April 10. “The doubled data rate enabled telemedicine and online capabilities aboard the ship, providing vital support to the COVID-19 relief effort.”

4SOPS controls the WGS satellite itself, while the Army’s 53rd Signal Battalion handles the WGS communications payloads that sit on the satellite bus and allocates bandwidth to those who need it.

“If you’re a user [like a terminal operator], and you want resources and you’re working in a certain area of the world, you’re going to have to go up through that region’s chain of command, so there’s a mission planning component. It takes several months,” First Lt. Tyler Shephard, 4SOPS assistant director of operations, told Air Force Magazine April 23. “It’s not like there’s a bandwidth button that we push at 4SOPS that does more bandwidth for the ships.”

For example, the military might be establishing a new operating base overseas that needs an Internet connection, or certain units might want more bandwidth to communicate during upcoming operations.

“You make a plan and then you have to submit that plan to another organization that’s going to review it, because remember, you’re not the only user requesting resources. There’s thousands and thousands. So there’s a priority list,” Shephard said.

Assisting the Navy with coronavirus relief jumped to the top of that list, alongside missions like presidential communications and other relief efforts.

When a bandwidth request is approved, that organization receives a communications plan that 4SOPS feeds into a satellite’s software to tell it what to do. That allocates an antenna or a piece of a payload for that group’s specific use—in this case, hospital ship operations—and 4SOPS can monitor, collect, and ship that data to other people who might need to use it. Regional satellite communications support centers run by the Army act as troubleshooters for any bandwidth issues that might arise.

The military has so much data and capability to move it around that adding an unexpected mission to the docket doesn’t mean other users are cut off, Shephard said. That could change if dozens of ships suddenly need connectivity.

“Who knows what’s going to happen on a global scale?” he said. “Right now, we can totally handle it. … It’s our day-to-day operations. We’re happy to do it.”

The squadron is finding some silver linings to the pandemic: they’re thankful to have jobs and help the nation, and the restrictions imposed on Airmen to stop the virus’s spread makes them think in new ways about how to do the same mission with fewer staff.

Senior Airman Htein Naing, a scheduler and trainer at 4SOPS, said pandemic operations have validated the squadron’s training because manpower and resources were available when they needed to speed up. Those accelerated processes could let the squadron react faster to regular mission needs, too.

It’s a success story for a fledgling Space Force trying to introduce itself to the nation and looking for new opportunities to explain the utility of its work. Building the Space Force at the same time a pandemic sweeps the globe offers a chance to rewrite history as well as serve the country in unexpected ways, Shephard said.

4SOPS isn’t the only Department of the Air Force organization lending a hand to the Navy. On April 24, the Air Force Research Laboratory said the Pentagon is deploying AFRL-built systems that will protect military medical facilities, including the Mercy and Comfort, from small drones. AFRL did not respond to questions about the counter-small unmanned aerial system technology or answer whether drones are threatening medical facilities.

“The system detects drone signals and properly identifies their position to facilitate effective countermeasures,” the lab said in a release. Those electronic countermeasures could include microwaves that fry a UAS’s internal hardware or tech that jams or redirects the aircraft. It’s unclear if this is a new system altogether or one of the technologies AFRL has vetted in counter-UAS trials.

The USNS Comfort, which is equipped with 1,000 beds, is leaving New York April 30 after treating 182 patients over nearly four weeks. It could head elsewhere to support another region’s hospitals. The Mercy is still deployed to Los Angeles and had treated 31 patients as of April 8, according to the New York Times.