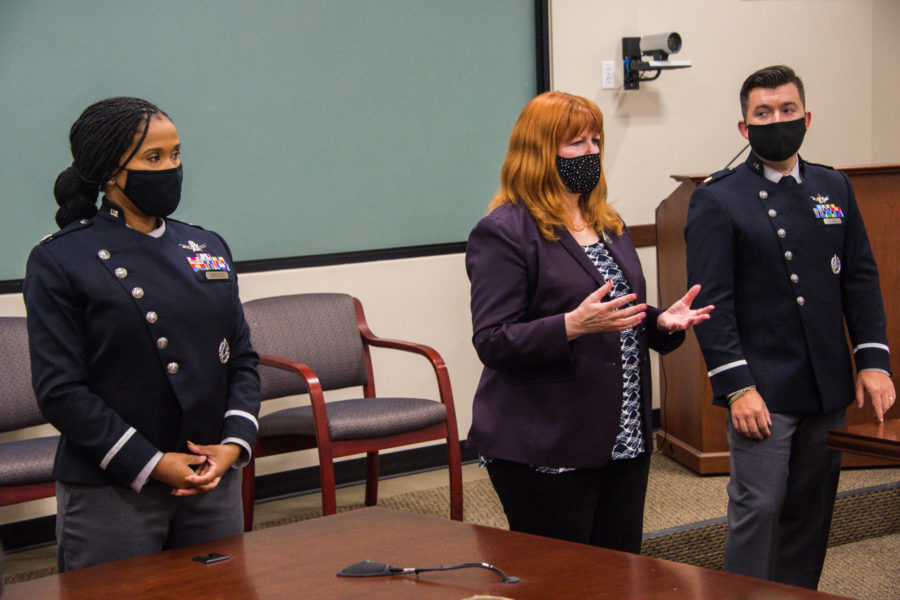 In the next several months, the service and the Air Force Uniform Office plan to expand those numbers—and draw ever closer to getting the new duds out to every Guardian, leaders said during the Life Cycle Industry Days conference.

Since the uniforms first debuted at AFA’s Air, Space & Cyber Conference in 2021, the Space Force has taken them on roadshows and tweaked some elements of the design, particularly the collar and the pants.

“So that is next where they roll out … about 30 different sizes for males and females. And we’ll have people come in and try them on and see how are they fitting,” Lovelady said. “And they might have to do some pattern adjustments to it after that.”

After that comes “wear testing,” which involves making “another set of 100 uniforms that will actually be worn by Guardians for at least three times a week for three months, to see what did they feel like, what did they like, not like, and if any kind of changes need to be made from there,” Lovelady said.

From there, the Air Force Uniform Office will confirm the details and “specs” of the design before sending them to the Defense Logistics Agency, which will put the uniform into production.

The timeline on fit and wear testing is still a little unsettled due to supply chain issues that have plagued the process—and other military branches—for months now. Tracy Roan, head of the Uniform Office, previously noted that her team wasn’t even slated to receive fabric for test assets until “late summer.”

Tentatively, however, the Space Force is now planning on fit testing taking place “somewhere between November and January. … And then, once we complete that, we’ll move to wear testing, which we hope to be in the spring [of 2023].”

All the while, Lovelady said, the Space Force has continued to receive positive feedback on the design of the uniforms, which incorporates symbols such as the USSF delta logo, a standing collar on the dark blue—nearly black—jacket, and a row of six offset buttons representing the six U.S. armed services.

In particular, Guardians have liked how the new uniforms allow for more movement than the traditional service dress uniforms, Lovelady said.

“One of the things that Tracy and [the Air Force Uniform Office] did is they’ve gone out and looked at different fabrics,” Lovelady said. “So our material actually has some stretch to it. It’s not the same polywool that has been used in the past. It’s still a polywool, but it has lycra. … So it’s much more comfortable. People can move in it.

“And especially with ours being a little bit more tighter through the [torso] because it’s essentially double breasted, it comes over, and it allows them that movement. I mean, when we went out on the roadshows, our female officers were like, ‘Look, I could do calisthenics in it.’ And people really, they put it on, and they’re like, ‘Oh my God, this feels so good.’ So we really had it well received.”

The emphasis on designing uniforms specifically for female Guardians has been a frequent theme from Space Force leaders throughout the rollout.

“Quite frankly, in the past, and I’m a retired military member, uniforms didn’t fit women necessarily as well as a lot of people would like,” Lovelady said. “And that has been really driven really by the top down. Our senior leadership wants to make sure that women have a uniform that fits appropriately and looks appropriate on them.

“And you’ll notice that with ours, we did a lot of things like, typically, women’s shirts close one way and men’s shirts close the other. And so when you look at the design of ours, it has that asymmetric look to it. We intentionally made it so it’s the same for both males and females. So when you see them at a distance, it’s not like on the males, the asymmetry goes one way and on females the other way. So it looks the same, but they wear appropriately for females.”