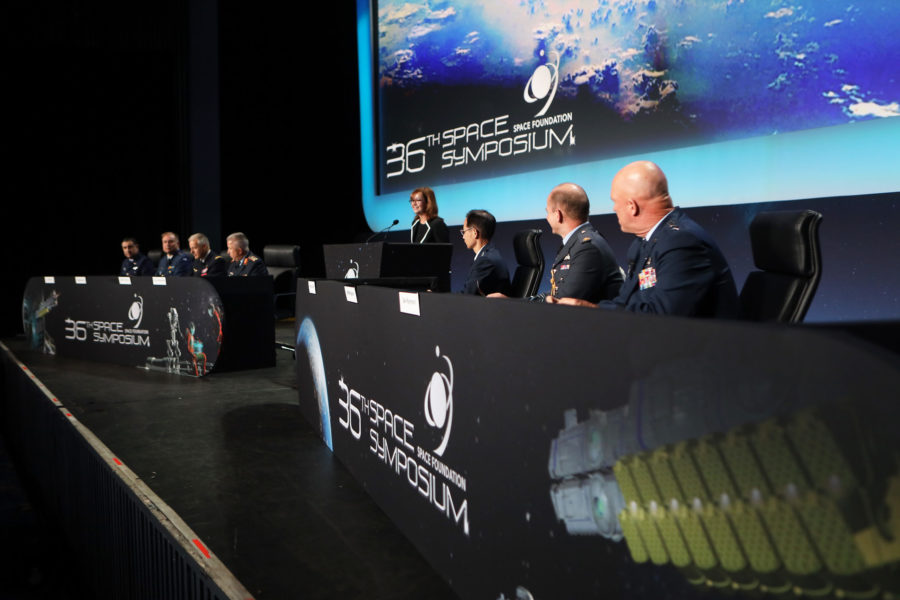 The United States and its allies must partner more closely to ensure space domain awareness in an increasingly complex and important domain, leading military space leaders said during a panel discussion in Colorado Springs, Colo.

Space leaders representing 23 nations, including the the United Kingdom, Finland, Japan, France, Germany, and Chile, joined U.S. Chief of Space Operations Gen. John W. “Jay” Raymond on Aug. 26, sharing their perspectives and embracing their cooperative spirit. “What you’ll see with these partners is we exercise together, we train together, we wargame together, we build capabilities together for the first time,” Raymond said.

But speaking Aug. 25 at the National Space Symposium, Raymond said the partners can do more to integrate networks and information systems to advance their shared mission of assured access to space in the face of demonstrated anti-satellite capabilities developed by China and Russia.

German Lt. Gen. Klaus Habersetzer, speaking just a month after his country stood up the Bundeswehr Space Command, said partnership is essential. Germany merged its civilian and military space resources a decade ago and ramped up international cooperation. “The challenges are simply too big to tackle alone,” he said.

Habersetzer called for better organization and coordination of investment among the allies. “This command is a perfect platform, a prerequisite for personnel exchange, the development of common procedures, exchanging of experiences, lessons identified, and lessons learned, and last but not least, creating a common space situational awareness,” he said.

British Air Chief Marshal Sir Mike Wigston said “operational collaboration,” including integrating capabilities, equipment and “getting people working together,” should be a common objective among the allies. De-classification could help in that process, he said.

Wigston reiterated Britain’s call for the United Nations to establish norms of behavior in space as a coordinated response to Chinese and Russian anti-satellite weapons development.

“The UK believes strongly that an open and resilient international order is fundamental to all of our security and prosperity, and that means people playing by the rules,” he said.

The French, who stood up a space command in 2010 and developed a space defense strategy in 2019, sent liaison officer Col. Laurent Rigal to U.S. Space Command in July.

French Air Force Maj. Gen. Michel Friedling sees resiliency through redundant capabilities as one of the fruits of cooperation. “According to our strategy, we have a huge field of cooperation regarding space operations,” he said— “from strategic communication to the ability to operate together, which requires common vision of threats, but also compatible doctrines, interoperable procedures, and capabilities and shared space domain awareness.”

Finland’s Air Command chief Maj. Gen. Pasi Jokinen noted that today’s on-orbit systems do not “fully support operations in the northern latitudes.” Only through coordinated cooperation do the allies gain such capabilities, he said. “There’s a lot to defend in space, and cooperation and partnerships are required because nobody can do space alone.”

Chief of Staff of the Japan Air Self-Defense Force Gen. Shunji Izutsu said rules will prevent conflict. “Space is nowadays very, very crowded, and if a fight occurs in the space, it means a gunfight in a crowded city,” he said. “Rule-making is very, very important.”

Izutsu said the same common approach developed for international air traffic control 50 years ago should be applied to the space domain.

“It just goes back to every warfighting domain: There’s rules for safe and professional behavior, and we don’t have that today in space,” Raymond said, noting that publicly calling out bad actors has helped. “It’s been very valuable to have not just one country messaging but multiple countries messaging.”

Editor’s Note: This story was updated at 10:02 a.m. on Aug. 30 to correct the rank for the Chief of Staff of the Japan Air Self-Defense Force Gen. Shunji Izutsu.