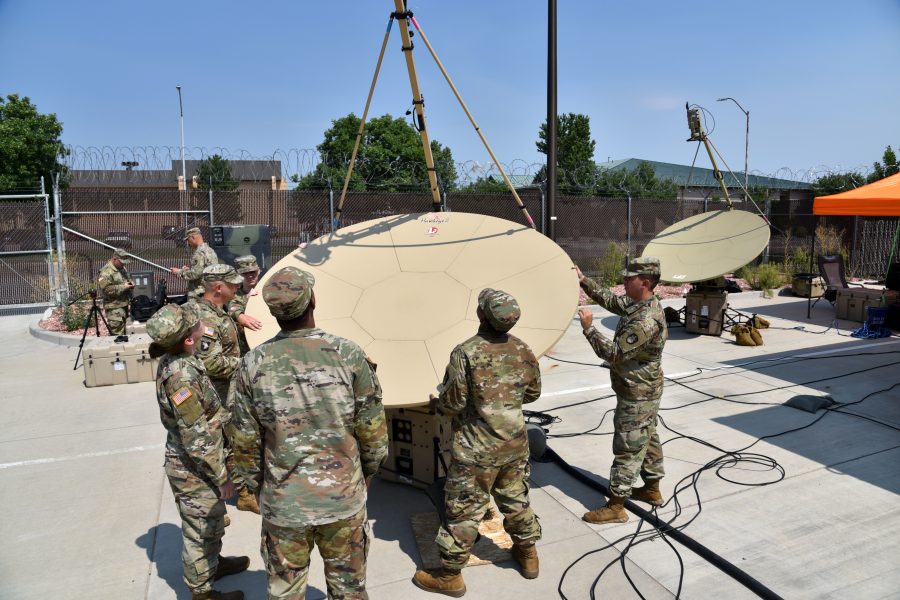 Space Force Makes Its Pitch to Woo Other Troops

Active-duty Soldiers, Sailors, and Marines will soon be able to apply for jobs in the Space Force, as the new service begins to include people outside of the Department of the Air Force for the first time.

The Space Force is looking for about 30 members of the Army and Navy departments to come on board this year, before ramping up to several hundred next year, Chief of Space Operations Gen. John W. “Jay” Raymond told reporters Feb. 3.

Military employees recently outlined the plan for transferring those troops, the majority of whom will come from land- and sea-focused backgrounds in ballistic missile defense, space surveillance, navigation, and satellite communications—missions that now largely fall under the Space Force.

“We’re going to need that joint expertise,” Brig. Gen. David N. Miller Jr., the Space Force’s deputy chief operations officer, said in an online town hall Jan. 28. “You have an advantage, coming from another service, that we need to latch onto. We value that warfighting experience that you may bring from the Army, from the Navy or the Marine Corps. We need you to stay focused on building that warfighting mentality into the space cadre.”

The application period opens in early spring, followed by a review of applicants’ performance records late that season. Those chosen to transfer will hear back early this summer, and the Space Force hopes to start welcoming troops from the Army and Navy in late summer or early fall. Officials did not provide specific dates for each part of the process.

Troops who volunteer to join the Space Force under the limited inter-service program are separate from the organizations within the Army and Navy departments that the Pentagon is planning to move into the Space Force starting in fiscal 2022, as dictated by Congress. Military officials have said for months that they are nearing a decision on those groups that will fall under the Space Force, but have not announced a final plan.

“We’re looking to bring individuals in that are not necessarily in those units or missions that are planning to join Space Force in FY-22,” said Matt Jobe, a senior policy analyst in the service’s personnel branch. “Those individuals that are in those signal battalions or satellite operations centers, those will have opportunities in ’22.”

Service members who are part of units that are moving under the Space Force won’t automatically transfer—they must volunteer to join on their own.

Air Force members, largely from Air Force Space Command, started formally becoming Guardians last year. As of this spring, the Space Force plans to have around 6,400 Active-duty uniformed members across the globe and will total around 16,000 military and civilian employees.

Space Force career experts outlined potential job paths for Guardians during the Jan. 28 presentation, pitching positions that can take service members around the world and job stability as people stay in one line of work for years at a time. Many transfers will need to go through at least some mission training once they join the service, they said.

When newcomers from the Army and Navy arrive to the space operations field, they’ll likely start in two areas: orbital warfare and space electronic warfare, said Col. Chris Putman, a career field manager in that area.

Orbital warfare entails commanding satellites and “moving the spacecraft on orbit, both to protect the missions that they perform … or to prevent the adversary from taking actions on orbit,” he said. Space EW personnel jam electronic signals to stop others from using the electromagnetic spectrum in space, and protecting those same wavelengths that U.S. assets need to communicate.

The Space Force isn’t necessarily off-limits for troops in jobs that don’t fall in the space lane—say, an Army infantryman or a Navy drone pilot. USSF in fiscal 2022 will start considering how to bring those people in, and hopes to have a firmer plan in 2023 to open the Space Force to anyone who wants to join, according to Jobe.

Officers and enlisted members who sign up for the Space Force start the clock on a three-year service commitment, Jobe added. That’s long enough to complete fresh training, make sure people have adjusted to their new work, and set them up for future promotions.

“We want to do very deliberate development with each individual that joins Space Force,” Jobe said. “We are not looking for box-checking.”

Soldiers, Sailors, and Marines who transfer in will keep their same rank, said Rob Romer, the Space Force’s deputy for strategic human capital planning. A pending promotion that is finalized “should travel with you,” he said, though it may delay the transfer process. Retirement plans would remain the same as well.

Officials are still ironing out the details of how to move people across the Defense Department, as top Space Force leaders reiterate they don’t want to “break” the other armed forces to build their own.

“We’re trying to do what we can to smooth this process out,” Romer said. “I know that one service goes a lot faster than the other service, but we’re going to work with all of the services to be sure that we understand the timelines, and if there’s a way to … speed things up, we’re all for that.”