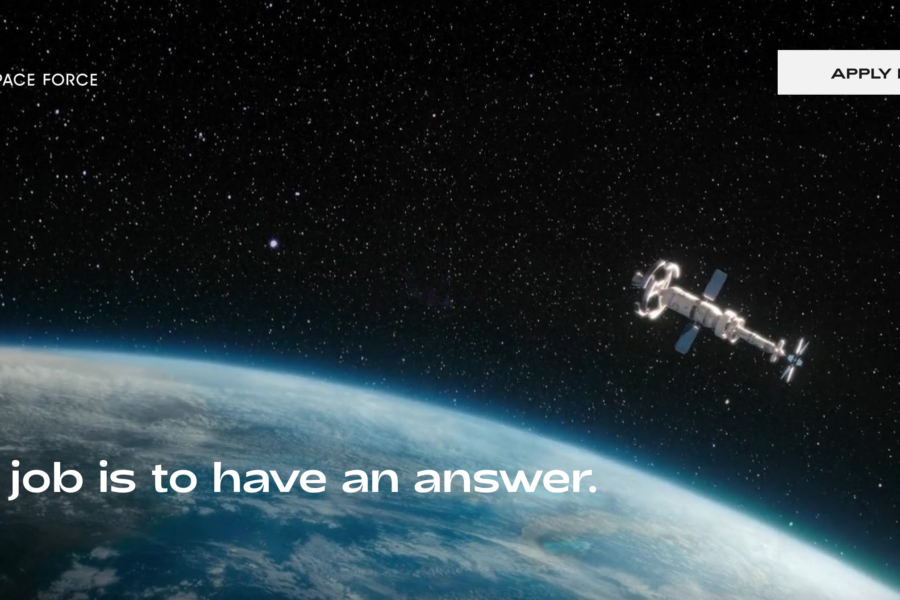 A new Space Force website aimed at recruiting the next generation of Guardians and educating the public on the new service’s mission launched Dec. 20, the service’s second birthday.

SpaceForce.com, like AirForce.com, details the core missions and career fields of the new service. It also includes a video of the Space Force’s recruiting commercial, “Origins,” which emphasizes the importance of the space domain and the need for a military branch dedicated to it; and links to the Space Force’s recruiting-specific social media profiles, @gospaceforce on Twitter, Instagram, and Facebook.

Visitors to the website can also survey details on the requirements and application process for enlisted service members, officers, and civilians. The site includes overviews of each career field, complete with qualifications needed, training, and tasks associated with each.

Including these details was crucial, Air Force Recruiting Service director of strategic marketing Barry Dickey said in an interview, because of how many Space Force recruits will interact with the site.

So far, the Space Force has had no trouble attracting interest from recruits. Thousands of Airmen, Sailors, Soldiers, and Marines applied to transfer to the new service, and the Air Force Recruiting Service met its goals in fiscal 2021 of about 400 enlisted Guardians and roughly three dozen officers from the civilian population.

Those goals are increasing in fiscal 2022, to 521 enlisted Guardians and about 70 officers. Yet the Space Force is expected to be the nation’s smallest military service by a long shot—so that means SpaceForce.com isn’t just about trying to attract as many recruits as possible.

“When the Space Force stood up, we knew in speaking with [Chief of Space Operations Gen. John W. “Jay” Raymond], we knew that our No. 1 job as marketing and advertising was really not to generate leads, which sounds kind of counterintuitive, but our No. 1 job was to expand the knowledge of the population about Space Force and its mission and to build the brand of Space Force,” Dickey said.

“So even if we don’t get the amount of … leads who sign up and fill out an application, what we’ll get is visitors to the site that might be influencers and business leaders and anyone who’s interested in the Space Force and what it does—and who can then go out and hopefully take the message from the website and go out and kind of be our recruiters.”

To that end, the website addresses some basic questions other services might not have to address, such as “What’s the difference between Space Force and NASA?” and “What is the Space Force’s mission?”

At different points, AirForce.com receives roughly 2 million visitors per month. The goal is for SpaceForce.com to build up to those kinds of numbers, Dickey said.

To help it get to that goal, the Air Force Recruiting Service marketing team will look to add features to the site in the coming months, such as “online gaming, virtual interaction, probably some chat functionality, more and more content about the Space Force as that branch of the service grows, and probably a lot more personal experiences with Guardians that are out there that are willing to share their experience with recruits,” Dickey said, similar to AirForce.com’s “Ask an Airman” section.

Plans for SpaceForce.com were first discussed almost as soon as the new service stood up in December 2019. But due to delays caused in part by the COVID-19 pandemic, efforts on the new site really ramped up about six months ago, Dickey said, with a strong push by the Air Force Recruiting Service and its marketing firm.