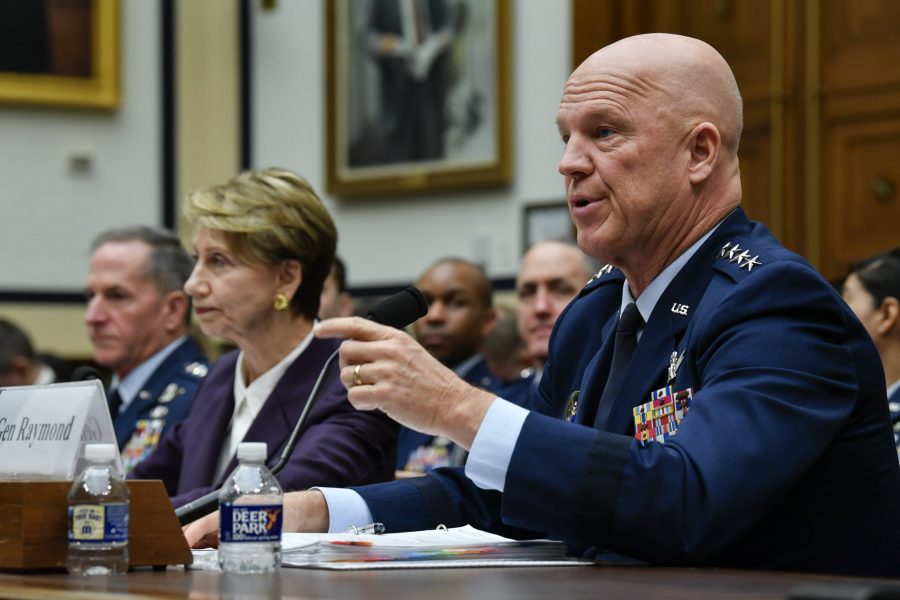 The Space Force is wrapping up its report on how to build a successful new military space acquisition enterprise, posing 10 recommendations to Capitol Hill while starting to move out on pieces of the plan.

Air Force Secretary Barbara Barrett was expected to sign the document by April 3. It then heads to senior Pentagon officials for coordination before the Defense Department submits it to lawmakers. It was due to the Hill on March 31.

Six of the 10 recommendations would require legislative changes, according to Shawn Barnes, acting assistant secretary of the Air Force for space acquisition and integration. The report stops short of suggesting bill text, which could land in the fiscal 2021 defense policy bill, but highlights policies and approaches that need to change to streamline how the Space Force develops, buys, and upgrades its systems.

Four other ideas can get underway without Congress’s approval. One is changing how the Joint Staff develops its requirements for space capabilities, Barnes hinted, while another is viewing space assets as a “basket of capabilities” instead of as myriad separate spending lines that require more complicated approval to move money between.

That portfolio approach has gained attention in the Air Force over the past few years as the development community looks for ways to move faster and spend money more wisely on products like software. The Space Force wants to convince Congress that R&D would remain transparent at the same time that it looks to streamline acquisition, which often means cutting down on reporting requirements and reducing the number of people involved in a decision.

Politico recently reported the DOD also wants clarity on whether the newly created position of Air Force space acquisition chief would be allowed to manage space purchases across the Department of Defense, or only within the Department of the Air Force.

“The way the law is written, it talks about it with respect to the Department of the Air Force. When you take a look at the joint explanatory language, it indicates the assistant secretary serves as the senior architect for space systems and programs across the Department of Defense. I think that’s what the intent was,” Barnes told Politico. “I think if it was reflected that way in the law, it would be clearer to everyone.”

Military and industry officials have suggested some of the ideas will spark fierce discussions on the Hill, but the recommendations are necessary for the broad space reforms underway to succeed.

The report is informed by discussions held during an architecture summit in February that brought together the Space and Missile Systems Center, Space Development Agency, and other organizations to discuss who should handle which parts of space acquisition. The Space Force is on the right path, Barnes said, but needs a formal document of a few pages to define what being a space enterprise or portfolio architect means. That guidance will eventually cover the Department of the Air Force, SDA, the Missile Defense Agency, and the intelligence community.

Setting up the future space acquisition enterprise means untangling the web of offices that are responsible for planning, experimenting, buying, integrating, and launching. Concerns persist about having too many agencies involved, but a structure is emerging that splits acquisition into short-term and long-term designs, traditional and out-of-the-box ideas, and tactical, operational, and strategic planning.

If DOD is successful, multiple offices will each handle their role without stepping on each other’s toes, spending unnecessarily, or siloing their programs.

Officials are ensuring “the sorts of work that happens in the National Capital Region remains strategic, and the work that happens at SMC is focused primarily on the sort of technical aspects of our architecture,” Barnes said. Between those two levels, the Space Security and Defense Program would focus on operational-level concerns like what space-related threats military personnel face in combat.

Among the various acquisition entities, one of the biggest challenges has been setting a baseline for what terms mean and what DOD is looking for, Barnes said. More modeling and simulation is also needed to understand what operational concerns might pop up for space assets, such as threats against satellites and ground stations, hindering intelligence-gathering, or blocking service members’ ability to do their jobs on Earth.

Space Development Agency Director Derek Tournear told reporters April 2 the summit helped each group understand more about what roles the other players in the acquisition ecosystem should hold. While SDA plans to move from the Office of the Secretary of Defense to the Space Force in the next few years, Tournear said it serves as a voice for the other services’ space requirements in the interim. That sets the department up for a better flow of information between the services as the Space Force matures, he said.

He argues all architecture decisions should not be funneled through the same office because short-term needs will always win out. His organization would focus on what the military might need in the long run that could look totally different from the plans of the next few years.

“When you talk about the architecture, you have … what you have today and what you need to make sure that you continue to deliver for the warfighter today and in the near future,” Tournear said. “That’s going to be a slightly different development path and approval path than the architecture for the one that is saying, ‘OK, now if we completely ignore what we have today and we’re trying to figure out a way that may constructively disrupt that architecture, what does that look like?’ That’s SDA’s role.”

SDA is in charge of figuring out how to tie together all military sensors and communications assets in space to create an overarching network that connects to personnel in the various services. Tournear wants to keep that planning separate from considerations of what needs to reach orbit now.

“If you … parallel that with what folks are doing at [the Defense Advanced Research Projects Agency, Space Rapid Capabilities Office], and the research labs, where they do the same mission with technology, we’re doing that mission with architectures to show it can be accomplished,” he said.

The fledgling Space Force Acquisition Council, created to oversee space procurement requirements and policy, has to lead this enterprise as it evolves over the coming decades while being realistic about the people and resources it has.

The Pentagon has enough people to handle space acquisition, Barnes said. But he imagines workforce requirements could shrink as program offices have fewer oversight demands to answer to. If training changes, he said, it will be to show acquisition workers how to handle issues at the lowest level possible and give them the confidence to make bold decisions.

Officials imagine that if military space personnel learn to think creatively and quickly, it will help the network of satellites, radars, and capabilities like GPS signals they provide stay safe and ahead of the curve even as other countries advance as well.