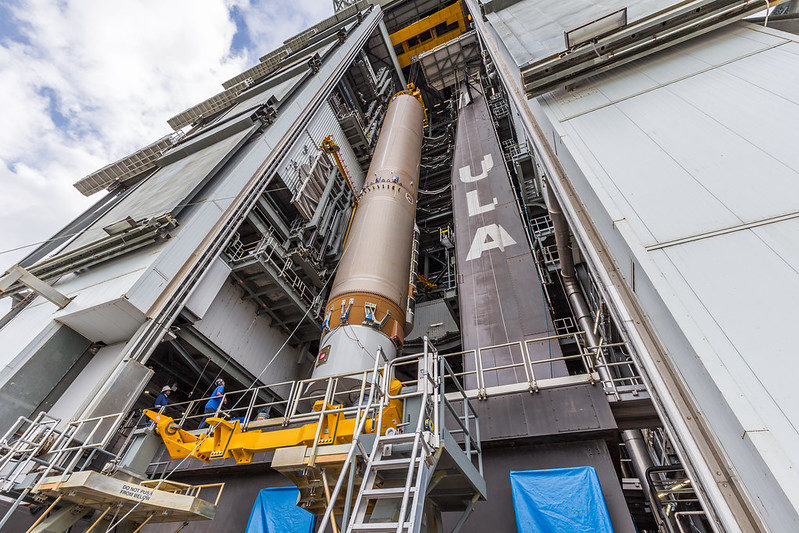 In all, 16 payloads from the Space Force, NASA, the National Nuclear Security Administration, and others will ride on the United Launch Alliance Atlas V 551 vehicle’s longest mission to date, estimated to clock seven hours, 10 minutes at a cost of $1.14 billion. The mission will include combined operational, nuclear detection, and prototype satellites in the areas of optical communication, space domain awareness, and weather.

“Our job is to get the technology ready for eventual transition to operational use,” the Space Test Program division director, Space Force Col. Carlos Quinones, told journalists by phone during a media briefing from Cape Canaveral.

The launch also marks the first in a series of missions known as Long Duration Propulsive ESPA. ESPA refers to expendable launch vehicle secondary payload adapter, a ring-shaped module that carries additional payloads that are both fixed and separable.

“The program is the only recurring propulsive rideshare option to orbit,” said Space Force Col. Heather Bogstie, chief of the Rapid Development Division. “The premise is to use the excess weight offered by launch vehicles to place prototypes on orbit faster and cheaper.”

The vision of LDPE is to increase the frequency of placing rings on orbit and to establish common dimensions and interfaces in order to reconstitute architectures or respond to impending threats faster.

“The rings themselves are what we are actually looking to transition more frequently into operation,” Bogstie said in response to a question from Air Force Magazine. The future program is called Rapid On-orbit Space Technology Evaluation Ring, or ROOSTER.

“By investing in the LDP Flash ROOSTER platform, we can ensure that we’re having that freight train to space, which is basically a cheap ride to space on a recurring basis, and we can easily accommodate reconstituting architectures or answering to threats that we may see in the near future,” she added. “We have these rings on orbit—rather than dispose of them, we would like to be able to use a residual capability of the rings to help provide resiliency to the Space Force architecture.”

Bogstie said the rings may have a use in communications or in on-orbit refueling or other servicing or logistics.

“As we transition into the new domain of space warfighting, which is more driven by a threat-driven paradigm, we in the launch enterprise are remaining very appreciative and committed to standing beside our long-standing successful partnerships,” she said of the pending ULA launch. “Our future launch capabilities will require constant evolution.”