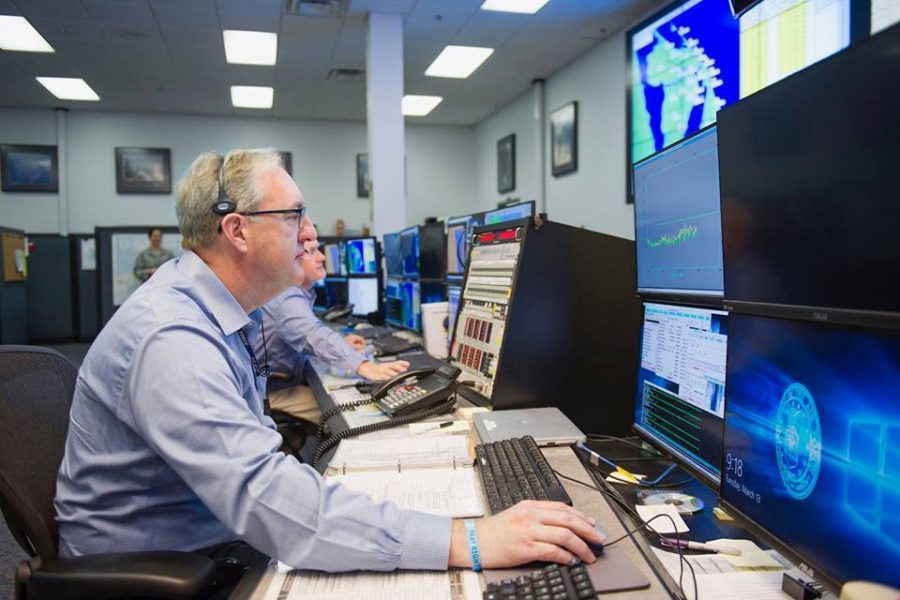 Employees of the Space Force’s 45th Weather Squadron include civilian launch weather officers who are tasked to work with a particular launch provider like United Launch Alliance or SpaceX, Active-duty personnel who fill in as needed on launch days, and enlisted forecasters who work around the clock.

Some in the squadron track and issue reports on daily weather conditions affecting work at Cape Canaveral, while others support each phase of a launch: moving equipment to its pad, the launch itself, and booster recovery, if needed. The squadron will also handle weather support for rescue operations and other parts of America’s return to manned spaceflight.

As the Cape looks at hosting about 50 launches this year, Maj. Jeremy Hromsco, an operations officer with the 45WS, said the squadron will need to grow from eight to 15 launch weather officers to support a schedule with 48 events.

Hromsco told Air Force Magazine that people would need to work in shifts as the group grows to 15 LWOs, likely three shifts of five employees. Those people would support not just the launch of a company they’re assigned to work with, but would help out with any activity happening during their shift. The squadron is already encouraging its workers to think outside their silos, such as getting enlisted Airmen to work more closely with civilian LWOs to make sure everyone is on the same page.

“We’ve got a launch in three hours from now, and then we’ve got an exercise later, and then they’re rolling the rocket out towards the end of my shift,” he said as an example. “I definitely feel within five to 10 years, that’s pretty much what we’re gonna have to do.”

The weather squadron is also considering how it could support the growing demand without needing exponentially more people and money. That could mean changing how the squadron trains to hand off duties between shifts, using virtual training instead of relying on free time on the operations floor, and improving certain types of forecasting data, such as for predicting lightning strikes sooner.

“We’re always trying to gain launch availability, and basically be able to provide greater opportunity to launch … by reducing the amount of time that we’re a no-go for weather,” he said.

For example, the squadron is working with local companies to prototype a three-dimensional weather visualization tool that gives the Space Force a better idea of how far away bad weather is from the launch site. Hromsco said it’s about two years away from being ready to use on a regular basis, and will eventually automatically tell operators if the atmosphere is OK for launch.

The squadron also redesigned its operations floor a few years ago to be able to support two or three launches at once, including a wall of video screens that shows more information on daily weather conditions.

Like everyone in the military space enterprise, weather operators are adjusting to the commercial boom that is shaping what the Pentagon puts in space and how it gets there. They now have to handle reusable rocket recoveries, a practice that promises to become more routine under the National Security Space Launch program.

The squadron will provide wind and wave information for companies like SpaceX that recover their boosters at sea. But the contractors can gather their own weather data, and they, not the military, get the final say over whether a recovery operation goes forward.

“What we make the call for is just safety of the launch,” Hromsco said. “Beyond that, whether it’s upper-level winds, if it’s recovery weather, we provide information, but it’s out of our hands, whether we call it go or no-go. That’s brought up a lot of questions over the past year.”

Airmen have been working with launch providers in recent months to better understand what conditions would cause a company to postpone a mission. Those considerations are different for every rocket design.

Hromsco said it gives the Space Force a “black eye” when companies end up ditching their launch or recovery plans after the weather squadron forecasts a low likelihood of problems. Some contractors rely on algorithms to give them a go-ahead, and some don’t want to divulge data—proprietary or not. That can hinder the squadron’s plan to move to a standard computer interface that shows all kinds of radar and wind data, no matter where it comes from.

“We’re trying to work with our customers to say, ‘Hey, can you give us something?’” he said, noting that SpaceX is complying. “There’s got to be something that they look at upper-level winds and they start to get concerned.  … We’re getting some pushback from some of the other customers.”