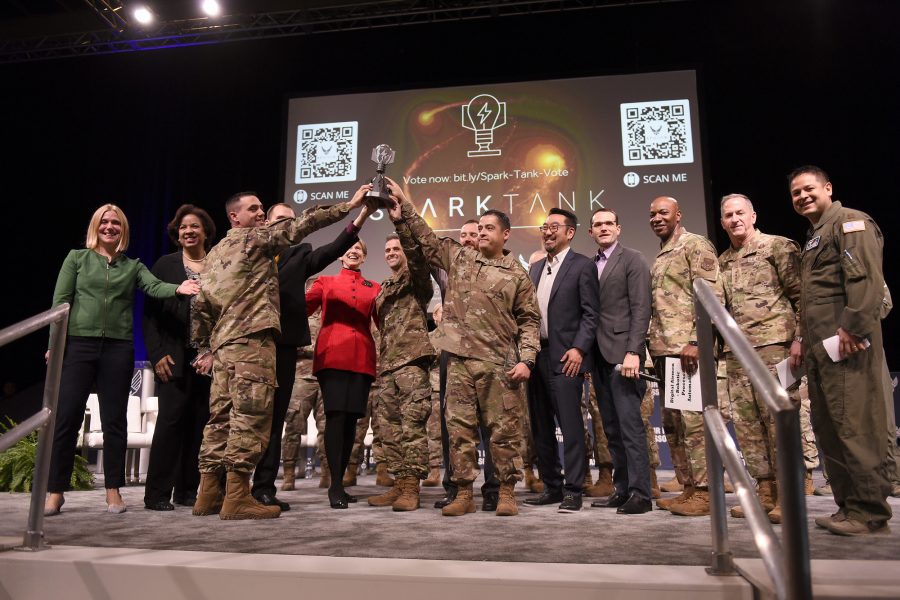 ORLANDO, Fla.—In a first for Spark Tank, the Air Force’s Airman-powered innovation competition, two teams were named co-champions. The winning ideas that bested over 200 other submissions—six of which were live-pitched onstage at the Air Force Association’s 2020 Air Warfare Symposium here on Feb. 28—look to improve the quality of F-35 pilot training and to add speed and efficiency to the weapons-loading process.

Here’s a closer look at the winning ideas, the teams behind them, and what inspired them:

“Here in Arizona on the Barry M. Goldwater Range, though threat resources are available, they are limited in number and lack fidelity, having a negative effect on the quality of F-35 pilot training,” a video about the innovation that was posted to AFWERX’s YouTube page said of the range, which serves personnel from Luke and Davis-Monthan Air Force bases, the Tuscon Air National Guard Base, and the U.S. Marine Corps. “This condition is insufficient for preparing our next generation of pilots for conventional warfare in a peer-to-peer or near-peer threat domains.”

In response, the team developed the Dynamic Unmanned Threat Emitter (or DUMTE, for short), which Coyle said “uses a software-defined radio to digitally recreate radar waveforms” and lets Airmen “manipulate the signal and change the threat within seconds.”

The development is meant to supplement current threat resources without breaking the bank, Treece said. Coyle said the team anticipates being able to place 50 of the systems on the range “for the cost of just one of these modern threat-emitter systems.”

One contributing factor to the DUMTE’s low price tag is that it “operates at a low power,” which Coyle said marries well with modern avionics’ ability “to detect low-power emissions.”

Another has been the team’s resourcefulness in tracking down affordable parts, which the Luke team bought online.

“In fact, Prototype No. 1 was built solely off parts straight outta Amazon,” he told judge Gene Kim, founder of Tripwire and author of “The Unicorn Project,” in response to a question about how they could track down the necessary components so cheaply.

Treece, who formally submitted the concept, represented Air Education and Training Command at the competition.

“We’re looking to partner up with AFRL [the Air Force Research Laboratory], and we’re asking for $1.5 million to get us through testing, research and development, and the fielding of several minimum viable products that we can start using to determine requirements and transfer this over to the warfighter,” Coyle said during the live pitch.

“Current weapons-loading checklists are overly complex and time-consuming,” Valenzuela explained in a video about the innovation posted to AFWERX’s YouTube page. “Oftentimes, team chiefs have to use four to five different PDF checklists and sort through upwards of 840 steps, just to find the 245 steps that apply to the task that they are performing. The abundance of non-value-added motion adds critical time to a speed-sensitive operation, and forces the team chief to focus on navigating their checklist rather than performing a safe and reliable load.”

“It filters and arranges steps from multiple technical orders to give Airmen a single, streamlined checklist,” he continued. In this way, resulting checklists are tailor-made for the tasks at hand.

Mercury was developed through a collaboration between the Spangdahlem Airmen, Kessel Run, MGMWERX, Bespin, and the 187th [Fighter Wing] Red Tails, Valenzuela said during his Feb. 28 pitch.

“In just six months, we evolved Mercury from an idea to a prototype, and recently our solution inspired the USAFE commander to invest $342,000 to take our software to the next level,” he recalled to the judges and almost standing-room audience. “Today, we have a fully functioning, accredited software with authority to operate on DOD servers, and we can load five of our 25 munitions on an F-16.”

According to the pitch, Mercury helped slash a single F-16’s load time by 36 percent (or 28 minutes) in tests. However, the solution can be scaled across “all weapons platforms, or any other career field, for that matter,” Valenzuela said.

He argued the checklist system could save money, enhance combat readiness, and increase agile combat employment by slashing load times.

Mercury won votes from both Toni Townes-Whitley, president of U.S. regulated industries at Microsoft, and Kim, who served as judges—or “Sparks”—alongside Barrett, Goldfein, and Chief Master Sergeant of the Air Force Kaleth Wright.

Once each of the five “Sparks” cast their vote and the results of an online poll that closed minutes after the last of the live pitches concluded, a two-way tie emerged between the Low Cost Threat Emitter Replication and Weapons Loading Smart Checklist Teams.

But when called to the stage to help break the tie, USAF acquisition chief Will Roper did something unexpected: He declared them co-victors.

In a Feb. 29 email to Air Force Magazine, AFWERX Marketing Manager Jordyn Fetter said the tech incubator saw the tie as a chance to show that its place “in the innovation ecosystem is flexible” and can be tweaked as required to meet Airmen’s needs.

That team, composed of Reservists from Joint Base Lewis-McChord, Wash., had requested funds to buy a 3D printer for use in mass-producing a corkscrew-like tool that’d make the battery cell extraction process safer, faster, and less costly (since, their pitch said, cells are frequently damaged during extraction attempts).

The team’s use of 3D printing, which its Airmen said they’ve used for a multitude of projects—not just the innovation at the centerpiece of their pitch—particularly piqued the interest of Goldfein.

“I do wanna have our folks work with you on how do we scale this quickly, because I’m not sure that one 3D printer is gonna do what you’re looking for, and we wanna get to a point in our Air Force where we are doing 3D printing as part of the expeditionary force, right?” he said.

Goldfein said the service has to assume that its “logistics train” will eventually “be under attack.”

“And so what that means is … we’re gonna be taking risk and printing parts, you know, in Estonia, in … you name it, where we’re gonna be deployed forward,” he added.

In the eyes of AFWERX, though, none of the teams who took the stage in Orlando left as losers.

“Senior leadership has requested that all the Airmen who pitched at this year’s event receive support to make their idea a reality, so we consider them all winners,” Fetter said.