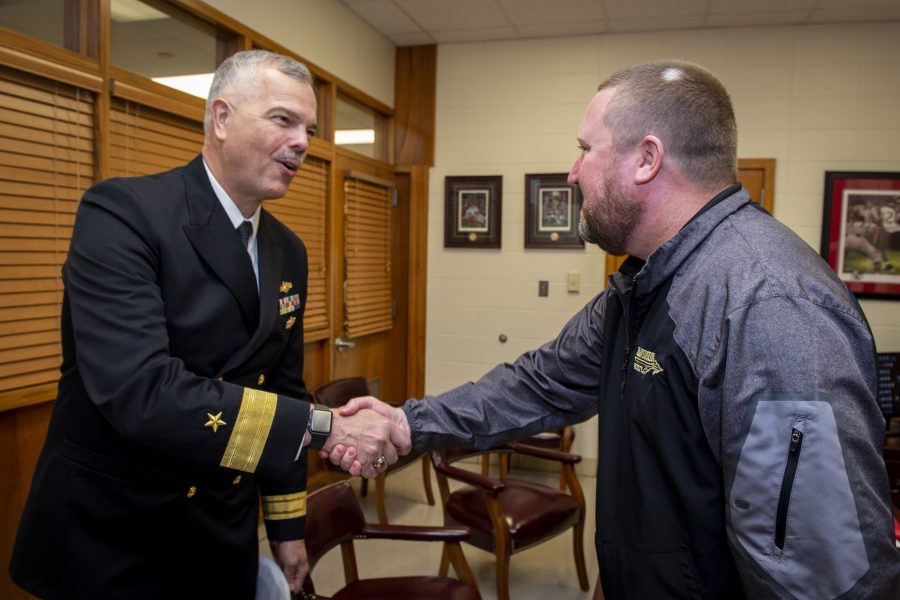 STRATCOM’s NC3 Enterprise Center got up and running early last year to better plan for future satellites, radios, aircraft, and other systems that connect nuclear platforms and weapons to the military and national leaders. It is working on a wholesale overhaul of the aging NC3 network as the Pentagon buys a new nuclear arsenal, hoping to modernize it for the digital age.

NC3, the technology that helps military officials move nuclear aircraft and submarines around the globe and trigger weapons if necessary, sits alongside a parallel effort to update conventional command and control. Officials have considered the possibility of a dual-use command system for conventional and nuclear assets, and the two types of warfare are growing more closely intertwined.

“Our core vision of NC3 Next-Generation is completely consistent with the concepts underlying [joint all-domain command and control],” Rear Admiral Ronald R. Fritzemeier, the center’s director, told Air Force Magazine on Sept. 29. “Fundamentally, JADC2 and NC3 Next-Gen will be … very closely interrelated. At some level, you would say, is that a JADC2 thing, or is that an NC3 thing, and the answer is yes.”

The military is exploring how to keep its connection to nuclear forces intact under threat, and how to keep hackers and jammers out as the nuclear enterprise connects to the Internet for the first time.

STRATCOM has “a number of activities” ongoing to try out new technology and concepts, Fritzemeier said. Where the Defense Department has talked about its future development efforts lasting over the course of decades, agencies are looking to move faster. It’s a more piecemeal approach to improve combat capability sooner, instead of waiting years for a full system to be ready.

“When we see stuff that looks good, …  we can insert it right away,” he said, without offering examples. “Many [of] the technologies that we’re talking about are, frankly, relatively mature. We’ve just not employed them from an NC3 standpoint. … The old 10-year program now needs to be the new six-month demonstration that you actually leave behind as an operational capability.”

Some of that exploration has taken place under the umbrella of the Air Force’s battle management exercises.

“Some of the issues or things that they’re focused on are not necessarily quite the same priority for us, but they’re consistent. In some cases, we’re just a partner, and we’re watching and looking for the results. In other cases, we’re actually helping to insert demonstration-type capabilities into that work,” Fritzemeier said.

He declined to say what NC3 systems are taking part in the demos.

STRATCOM wants to try out technology on its own as well. There’s nothing specific planned, Fritzemeier said, but the NC3 Enterprise Center is trying to mimic the Air Force and Navy’s outreach to Silicon Valley companies and other nontraditional defense contractors, and set up its own experiments.

Virtual or live-fly events could shape STRATCOM’s understanding of what it needs in a new jet that replaces the Air Force’s E-4B flying command center, which can order intercontinental ballistic missile strikes if Airmen in command centers underground can’t do it themselves.

Fritzemeier told Inside Defense on Sept. 25 that an analysis of what could follow the E-4B is complete. The Pentagon wants to combine the E-4B “Doomsday” plane with the Navy’s E-6B airborne command post into a new aircraft dubbed the “Survivable Airborne Operations Center.” It’s possible that a future aircraft could ferry high-level officials around as an executive airlift platform as well.

Upgrades to the NC3 enterprise are still largely under wraps. Elizabeth Durham-Ruiz, the center’s former director, said last year they had found ways to “align” certain programs to make them more coordinated and capable. She declined to provide examples. Those changes, which the Office of the Secretary of Defense reviewed, could affect how quickly systems are replaced or the capabilities they offer.

Moving forward, STRATCOM could move part of the NC3 Enterprise Center to U.S. Space Command, which was revived last year and oversees daily operations of satellites, orbital radars, and similar systems. Putting a piece of the center in SPACECOM would create a more direct line to the officials who manage nuclear communications satellites and other space-related pieces of the NC3 enterprise, to get a better understanding of their needs.