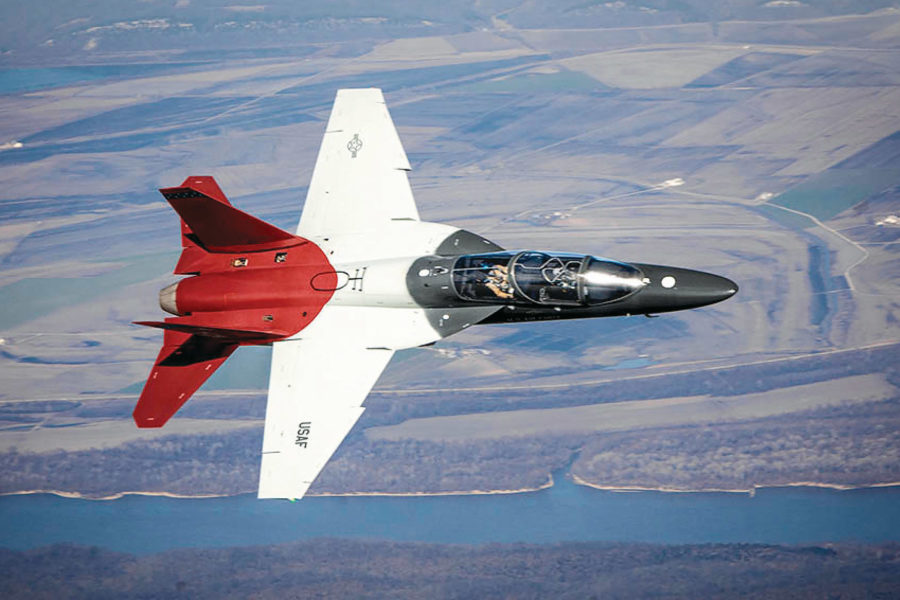 The Air Force is requesting limited funding for its T-7A Red Hawk next-generation trainer because of technical issues uncovered in testing, which have pushed back the full-rate production decision on the aircraft by at least a year.

The 2022 budget request calls for $188.9 million in research, development, test, and evaluation funding for the T-7. This is below the $206.4 million projected for fiscal 2022 in the 2021 budget request’s future year defense program. The Air Force is not releasing FYDP information this year. The 2022 budget also requests just $10.4 million in advance procurement funding for the T-7.

The Air Force, in a statement, said multiple issues are inhibiting the Red Hawk’s progress toward production. For example, the Milestone C decision, or full-rate production, slipped from 2022 to 2023 because of supplier-side critical parts shortages, initial design delays, and the need for more testing after the “discovery of aircraft wing rock,” which means the T-7 can be unstable in the roll axis when flying at high angles of attack.

Air Force Chief of Staff Gen. Charles Q. Brown Jr. reassured members of the House Armed Services Committee on June 16 that despite the decrease in funding, the service remains committed to replacing its aging T-38s with the T-7.

“Our focus and commitment to the T-7 has not waned,” Brown said. “We want to make sure the money aligns with where the program is.”

The Air Force has touted the use of digital engineering for the T-7, with then-Air Force Secretary Barbara M. Barrett announced in September 2020 that Boeing’s Red Hawk trainer jet would be the first plane to earn an “e” designation, as the eT-7A, signifying it was designed and tested using digital engineering. Digital engineering uses advanced computer modeling and simulation, and technology like virtual and augmented reality, to quickly draw up hardware blueprints and vet how various configurations would work in the real world without building a physical prototype.

However, officials told Air Force Magazine on June 16 there is an “inherent schedule risk because of the aggressive nature of the program’s schedule.”

The T-7 APT program office is “continuously analyzing methods to improve schedule” and is working with Boeing with the goal of a Milestone C production decision in fiscal 2023. Previous acquisition reports projected the decision to be made in 2022.

Boeing said in February that the first production aircraft will roll out in early 2022. The first airworthy T-7 will be delivered in 2023, and the first squadron is expected to be operational in 2024, with full operational capability in 2034. The company wants to build up to five deliveries per month, with the Air Force planning to buy 351 T-7As.

The Air Force, in an April acquisition report, said the aircraft had flown more than 250 test sorties, and it was expected to enter Phase 2 of developmental testing in 2021.