Skip to content
The Navigation Cameras, or Navcams, aboard NASA’s Perseverance Mars rover captured this view of the rover’s deck on Feb. 20, 2021. This view provides a good look at PIXL (the Planetary Instrument for X-ray Lithochemistry), one of the instruments on the rover’s stowed arm. NASA/JPL-Caltech photo.
Expand Photo 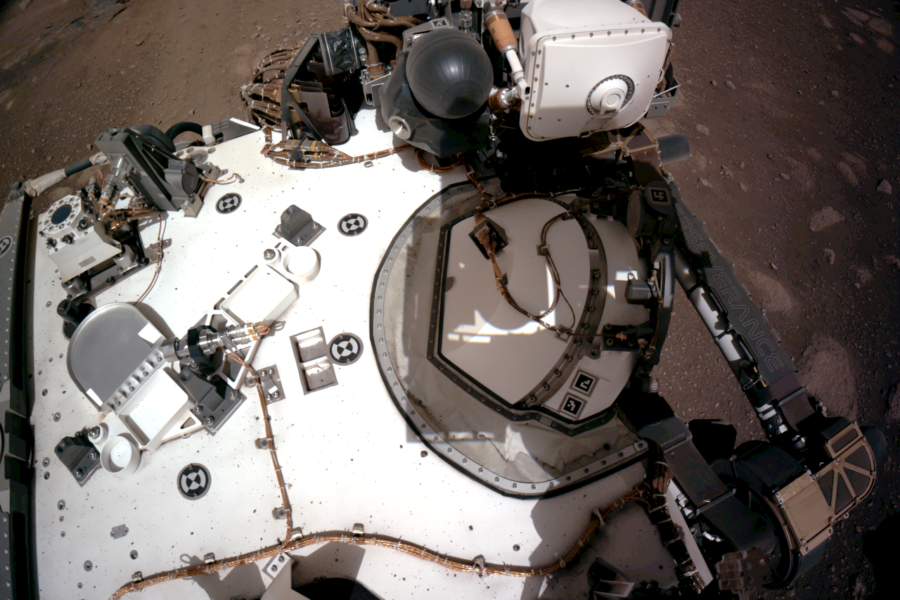 Last week, NASA’s Perseverance rover thrilled citizens of Earth when it landed on Mars with the promise of a new chapter in red planet exploration.

But the military could also learn a thing or two from the spacecraft’s trip for future research and development efforts, Space Force Chief Scientist Joel B. Mozer said Feb. 24 during AFA’s virtual Aerospace Warfare Symposium.

NASA “took a very advanced machine with tons of advanced sensors to a distant, hostile place without real-time communication or [positioning, navigation, and timing] infrastructure,” Mozer said. “They put their package right on target, using automated decision-making and terrain-relative navigation. These are exactly the technologies that we will need to fight wars in the future.”

The Air Force and Space Force need to pay attention to the rover’s adventures, he said, because China is using similar spacecraft to collect samples from the dark side of the moon.

The Department of the Air Force, which encompasses both the Air Force and Space Force, has highlighted many of those forward-looking ideas for years as must-have tools to win against other advanced militaries. To get there, its research and development budget nearly doubled from fiscal 2011 to fiscal 2020, when it reached about $35 billion.

Even as the military tries to speed toward flashy new technology, it must not lose sight of the building blocks that lead to breakthroughs, said Gen. Arnold W. Bunch Jr., head of Air Force Materiel Command.

“I don’t want any reduction in … basic research funding,” he said. “We’ve got to continue to focus in that area, and not just [get] caught up with what we’re doing now, or five years from now. What technologies and what research areas do we need to be focused on so we’re looking 30 years out?”

The Air Force’s research and development budget request was nearly $27 billion for fiscal 2021, while the Space Force asked for $10.3 billion.

No matter which part of the Air Force Research Laboratory comes up with the next great idea in aerospace, Bunch said, it must be able to translate to both the air and space realms. He praised the decision to keep both research areas underneath the lab, saying splitting up air and space programs would stymie innovation.

The military must design its technology to take on a set of challenges that spans domains, Moser said. That information war is already underway.

“Combatants are going to strive to collect and act on as much information as they can as part of the kill chain,” while trying to stop the U.S. from doing the same, he said. “We have to get in the mode where we’re designing our systems to operate in an austere, ‘fog of war,’ openly hostile cyber environment.”

That’s where Perseverance could lend some inspiration: making sure combat information can get where it needs to go, despite traveling somewhere inhospitable. It’s an argument in favor of unhackable AI, quantum computing, and communication upgrades, Moser said.

“Developing defensive and offensive tools for information-based warfare … that’s where our big leaps and strides are going to come in the near term,” he added.

The Department of the Air Force has multiple initiatives underway, like the cutting-edge “Vanguard” programs and various pathfinders, to try to deliver new products to troops faster. But if they want to succeed, officials argue, they need to push the envelope a bit more.

“We have to continue to emphasize within the Research Lab and within the S&T community, that failure is OK,” Bunch said. “If everything we’re doing within AFRL is successful, and successfully transitions, then, quite honestly, we have failed miserably.”