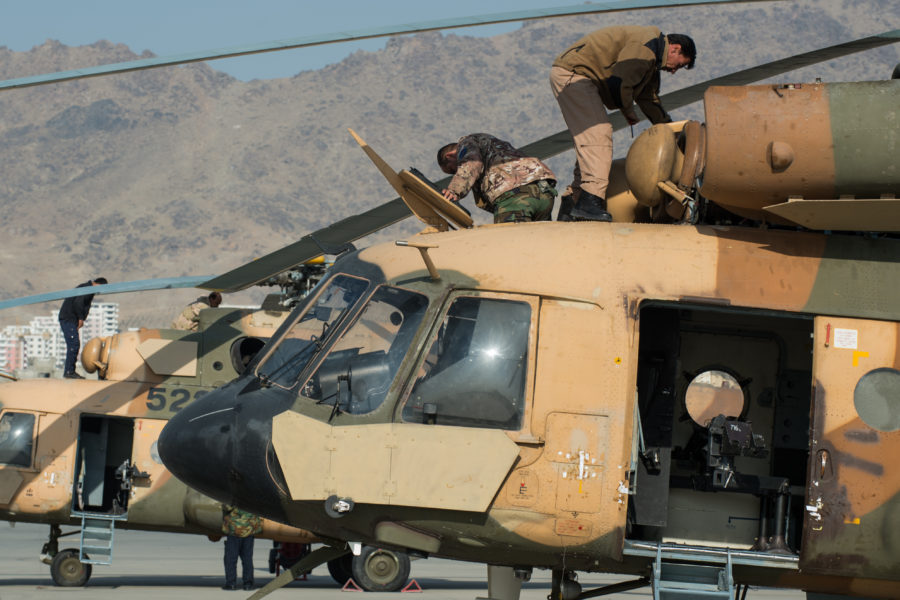 The U.S. military is looking at new ways to train Afghan forces and for contractors to continue to work on Afghan Air Force aircraft following the full withdrawal of American troops this year.

Chairman of the Joint Chiefs of Staff Army Gen. Mark A. Milley, during a May 6 briefing at the Pentagon, said the ability of the Afghan Air Force to continue supporting ground operations against the Taliban is important to ensure the country is not overrun after American and coalition troops leave.

The Pentagon is working on its plans to support the Afghan military going forward in addition to its plans for “over-the-horizon” counterterrorism missions and logistics after the withdrawal.

“Maintaining logistic support to the Afghan Air Force is a key task that we have to sort out, doing it over the horizon, but also in country,” Milley said. “It could be done by contractors. A lot of that’s going to be dependent on the … security conditions on the ground, but the intent is to keep the Afghan Air Force in the air and to provide them with continued maintenance.”

The drawdown, as announced by President Joe Biden on April 14, covers U.S. and coalition military personnel along with contractors—“all of our capabilities that we are responsible for,” Defense Secretary Lloyd J. Austin III said during the briefing. Contractors do have the ability to renegotiate their contracts, which could enable some to stay in the country.

Austin said he is hopeful the Afghan security forces will play a “major role in stopping the Taliban.” There has been a high level of attacks in recent days as the Taliban looks to “increase pressure” on U.S. and coalition forces, he said.

“We will continue to support them after we retrograde with funding, with over-the-horizon logistics,” Austin said. “We will remain partners with the Afghan government, with the Afghan military, and certainly hope, through our continued support, the Afghan security forces can be effective. They have a pretty significant capability, but we expect that this will be a challenge for them.”

Milley said it is “not a foregone conclusion” that dire predictions, such as the fall of Kabul, will occur after the U.S. and coalition troops leave. There is a “significant capability within the Afghan government, and we have to see how this plays out.”

“The intent is to keep an embassy open, and to keep supporting the Afghan government, the Afghan security forces, with financial aid,” Milley said. “We’ll also continue to take a look at training them, in perhaps other locations, but I don’t know, we haven’t figured that out 100 percent yet. But also things like maintenance support and perhaps [counterterrorism] support from over the horizon. There’s a lot of ways to do that. We’re very capable of doing it, and we’re working on those plans right now.”