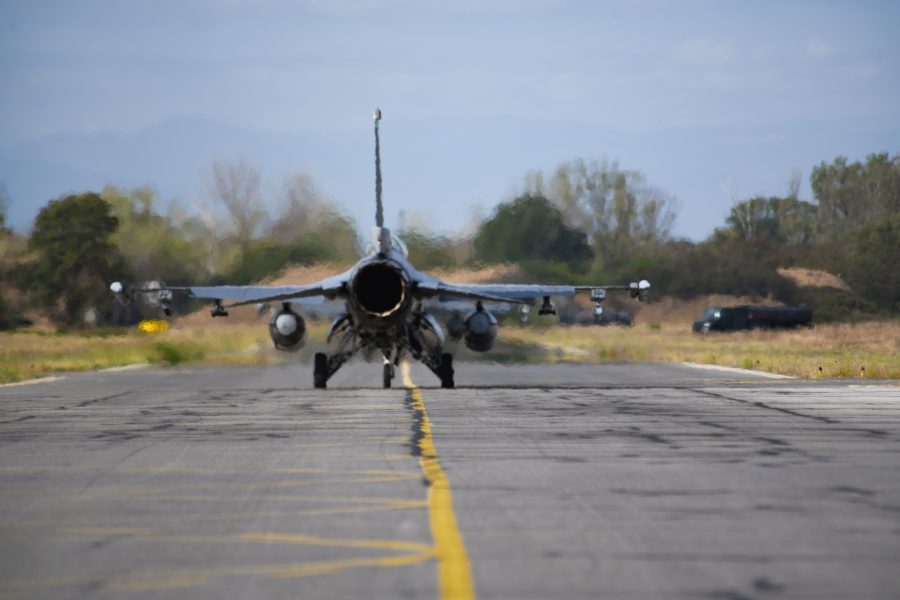 The multilateral exercise, to which the squadron sent Airmen and six F-16s, boosts “operational capacity and capability,” as well as interoperability with Bulgaria, Maj. Rohan Naldrett-Jays, the squadron’s chief of standardizations and evaluation, told Air Force Magazine. But, it also helps the Italy-based squadron fine-tune its ability to deploy aircraft and manpower anywhere in the European theater with agility—a critical part of Chief of Staff Gen. Charles Q. Brown Jr.’s “accelerate change, or lose” directive for the Total Force.

Naldrett-Jays said the pursuit of agile deployments within Europe and relationship building with NATO partners, “not just in times of combat, but in times of peace and … training,” are two ways the Triple Nickel is working to speed change at the squadron level.

The unit is looking to alter its approach to warfighting, by sending “small contingents of a fighter squadron and [moving] them across Europe,” to back up “European and NATO operations,” and “to support those in multiple locations all at once from one fighter squadron,” he said.

“What it actually looks like if you’re here is the mission planning process—so, helping each other mission plan and get ready to go off [into] the airspace and conduct operations safely. [And], how to force package, so … what strengths and what weaknesses do[es] each airframe have, and then, obviously, learning from each other,” he said.

Another goal of the exercise was to come up with local procedures for F-16 operations so USAF aircraft could return to the area, Naldrett-Jays added, saying he hopes Graf Ignatievo Air Base, Bulgaria, becomes a mainstay for the squadron, since its Airmen are already familiar with the base “and what support we need to bring with us.”

“Areas like this are gonna be huge, based on how we’re strategizing for the future,” he said.

The exercise helped the squadron modify its standard operating procedures to factor in its partners’ (and, by extension, their airframes’)—strengths and weaknesses, he said.

“It’s been a challenge, but it hasn’t been a bad thing by any means, because these are things that I’m excited that we get to kind of work through now so that if we have to go somewhere as a NATO partner … we’re ready to show up to the table and win as a team,” he said.

F-16s also got the chance to practice taking on Soviet-era aircraft, Naldrett-Jays noted.

Thracian Viper is making the squadron better versed in what it means to balance field training and regular duties in the COVID-era, since he said the pandemic forced Triple Nickel to bring a smaller squadron footprint than planned and leave a detachment back at Aviano in case immediate deployers were needed elsewhere in the U.S. European Command area of responsibility.

“Where we’re at from an Air Force perspective, as far as coronavirus is concerned, is trying to conduct training, keep our readiness at a high state, and find ways to become better fighter pilots and a better force without letting coronavirus get in our way,” he said.