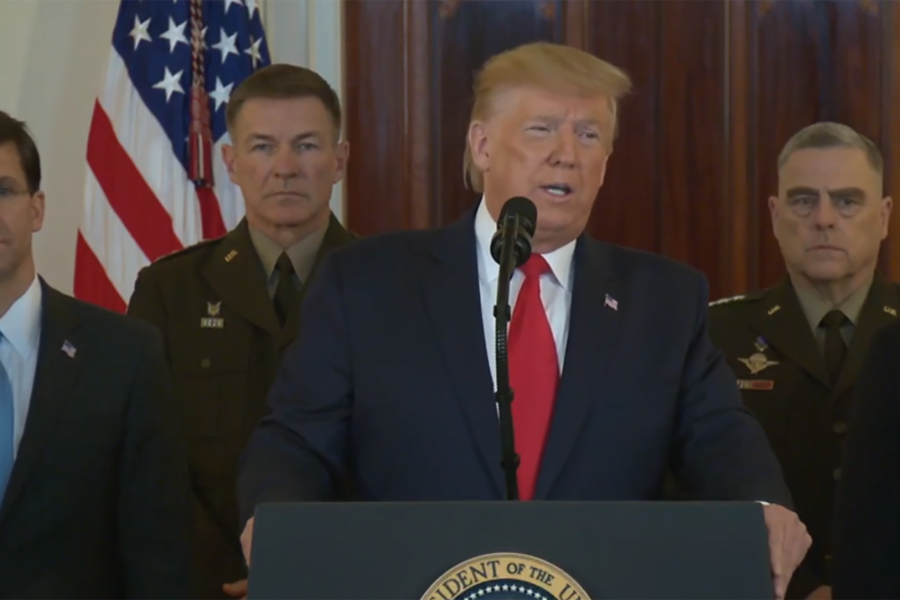 An American early warning system and advance notice from the Iraqi government allowed US forces to take cover before a barrage of Iranian ballistic missiles were fired at two Iraqi bases hosting US personnel and assets on Jan. 7. No US, coalition, or Iraqi forces were injured in the attack, President Donald Trump announced.

“The American people should be extremely grateful and happy that no Americans were harmed in last night’s attack by the Iranian regime,” Trump said in brief remarks at the White House.

Iran fired more than a dozen missiles at Al Asad Air Base and a base near Erbil late Jan. 7. The salvo was in response to the Jan. 3 US drone strike that killed Iranian military leader Qassem Soleimani and the deputy head of the Iranian-backed Popular Mobilization Forces. Iranian officials said shortly after the attack that its response was finished.

Trump said there was “minimal damage” sustained at the bases. Satellite imagery, released by Planet Labs and the Middlebury Institute of International Studies, show temporary hangars and two other buildings at the sprawling Al Asad base destroyed.

“Iran appears to be standing down,” Trump said, adding it is a “Good thing for all parties concerned, a very good thing for the world.”

Chairman of the Joint Chiefs of Staff Gen. Mark Milley, speaking to reporters after briefing lawmakers, said Iran launched 16 missiles in total, from three sites inside its borders. Based on the initial assessment, it appears some buildings, vehicles, tents, and taxiways were hit. He said he believes Iran intended to kill US forces along with damaging aircraft and infrastructure, but that the early warning kept personnel safe.

Earlier Jan. 8, Iraqi Prime Minister Adil Abdul al-Mahdi said in a statement that his government had been warned of an imminent attack shortly before the missiles launched, and that the strikes would be limited “to the whereabouts of the US military in Iraq.” He confirmed that no Iraqi personnel were injured, and said Iraq “rejects the violation of sovereignty and aggression” by Iran. Iraq’s Foreign Ministry summoned Iran’s ambassador to discuss the attack.

Iranian Foreign Minister Javad Zarif tweeted shortly after the attack ended that Iran had concluded its attacks. “We do not seek escalation or war, ” he said, “but will defend ourselves against any aggression.”

Muqtada al Sadr, a prominent Shiite cleric in Iraq, said in a statement that the crisis was over and called on pro-Iranian militias to refrain from conducting any further attacks, according to The Washington Post. But not long after, rockets fell near the US Embassy in Baghdad. No injuries reported.

Trump’s speech, and remarks by Iranian officials, suggest immediate tensions are decreasing. However, the US will impose additional economic sanctions and is evaluating additional responses.

Flanked by senior military officials including Defense Secretary Mark Esper, Milley, and members of the joint staff, including Air Force Chief of Staff Gen. David Goldfein, Trump said the United States wants the Iranian people “to have a future, and a great future, one you deserve.” But in order for that to happen, he added, Tehran cannot foment violence and hatred in the region. Trump said there is even an opportunity for the US and Iran to work together to combat the Islamic State group in the Middle East.

The President also called on NATO to become more involved in the Middle East going forward. As tensions rose, both NATO and the US suspended combat and training operations. It is not clear when those operations will resume. Trump called NATO Secretary General Jens Stoltenberg on Jan. 8. According to a readout of the call, the two “agreed that NATO could contribute more to regional stability and the fight against international terrorism.”