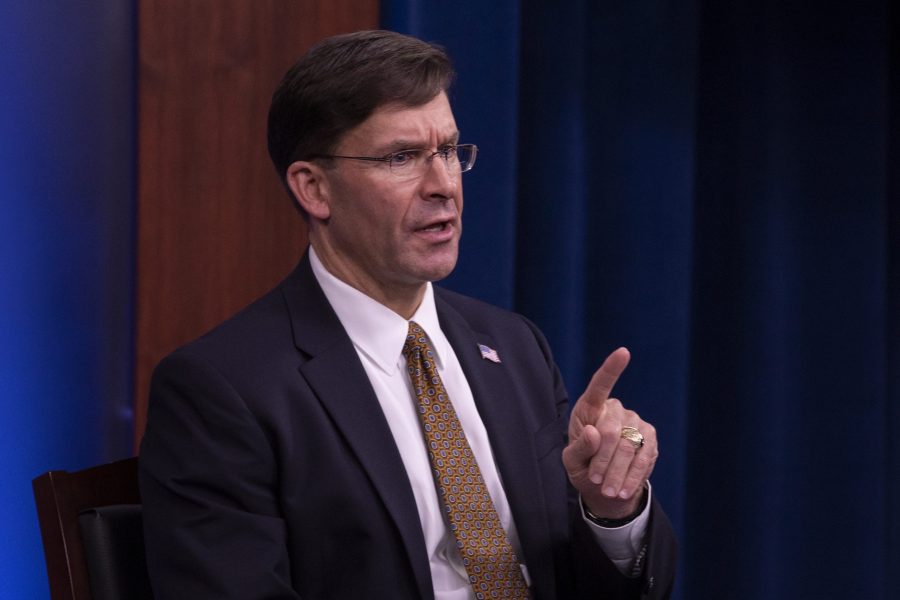 “Chris will do a GREAT job! Mark Esper has been terminated,” Trump tweeted. “I would like to thank him for his service.”

The move comes shortly after the media declared former Vice President Joe Biden the projected President-elect. With only 72 days left of a Trump administration, it is unlikely he will nominate a candidate to take the role permanently.

Esper, during his one year and 109 days in office, focused largely on implementing the National Defense Strategy he inherited from Mattis, aligning department priorities and force structure toward preparing for “great power competition” with potential adversaries Russia and China. This included the “zero-based” reviews of military combatant commands across the globe, seeking to move away from low-intensity conflict and potentially removing thousands of troops from Europe.

He also oversaw the creation of the U.S. Space Force, which became a new branch about five months into his tenure. Esper leaves the Pentagon as the Defense Department is attempting to draw down from Afghanistan amid fraught negotiations with the Taliban, and before Congressional leaders pass a defense authorization bill. Additionally, the military is still dealing with the COVID-19 pandemic and is expected, through Operation Warp Speed and the distribution of equipment, to be a leading part of the implementation of a vaccine once approved.

Esper, in a Nov. 9 “Final Message to the Department” wrote that he was “particularly proud” of the progress made in implementing the National Defense Strategy, modernizing the military, improving readiness, working with allies, and reforming the department, especially “in light of the challenges we faced along the way: a global pandemic; confrontation with Iran and its proxies throughout the Middle East; continued deployment of troops into conflict zones; domestic civil unrest; malign behavior globally by Russia and China; and a charged political atmosphere here at home.”

“Through thick and thin, however, we have always put people and country first,” he wrote.

In a separate Nov. 9 letter addressed to Trump, Esper writes that he serves “in deference to the Constitution, so I accept your decision to replace me. I step aside knowing there is much we achieved at the Defense Department over the last eighteen months to protect the nation and improve the readiness, capabilities, and professionalism of the joint force, while fundamentally transforming and preparing the military for the future.”

Before becoming Defense Secretary, Esper served as Secretary of the Army in the Trump administration. Multiple news outlets reported in recent days that Esper had prepared a letter of resignation, with NBC News reporting he was helping members of Congress to draft legislation stripping the names of Confederate leaders from military installations—a position Trump opposes. The Pentagon attempted to push back on the reporting, with spokesman Jonathan Rath Hoffman saying Esper had no plans to resign.

In addition to distancing himself from the White House on the Confederate naming issue—and taking steps to ban the Confederate flag from bases, Esper also distanced himself from Trump’s reaction to protests across the country, and specifically in Washington, D.C., following the May death of George Floyd at the hands of Minneapolis police. Esper, who appeared alongside Trump after Lafayette Square was forcibly cleared, said he opposed invoking the Insurrection Act to further quell unrest.

Trump has publicly disparaged Esper, including referring to him in a speech by the nickname “Yesper” for a reputation of not disagreeing with White House policies. Esper had taken a low profile in recent months, only appearing in recorded speeches or think tank events focused on the National Defense Strategy. He has not appeared at a news conference since July.

Miller has served as the director of the National Counterterrorism Center since August, and previously served as the deputy assistant secretary of defense for special operations and combating terrorism. He is a former U.S. Army officer who also worked on the National Security Council. In selecting Miller, Trump skipped over current Deputy Secretary of Defense David L. Norquist and the current service Secretaries.