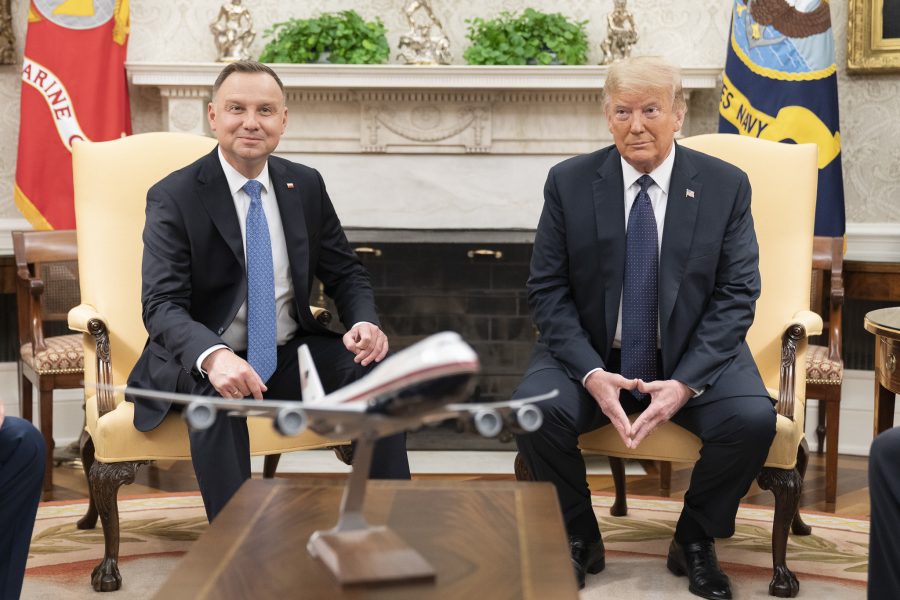 Trump: U.S. to Withdraw Forces From Germany and Move Them to Poland

Some of the U.S. forces withdrawing from Germany will go to Poland, with the new host country paying to bring in the troops. However, the overall American footprint in Europe will drop, President Donald Trump said June 24 during an appearance with Polish President Andrzej Duda.

Earlier this month, Trump said he was ordering the Pentagon to withdraw almost 10,000 forces from Germany and cap the total number that could be in the country at one time at 25,000. During the appearance in the Rose Garden, Trump said Germany is not meeting the NATO goal of spending 2 percent of its gross domestic product on defense, a mark Poland is meeting.

“They asked us if we would send some additional troops,” Trump said. “They’re going to pay for that. They’ll be paying for the sending of additional troops and we’ll probably be moving them from Germany to Poland. We’re going to be reducing Germany very substantially.”

The leaders are expected to sign a Defense Cooperation Agreement. The details on the forces that will be moved have not been announced, and no timeline has been disclosed. Duda said he “wouldn’t dare” tell the U.S. where to send its Soldiers, but the move to send some of them to Poland is a “very responsible decision.”

“The troops in Poland demonstrates that Article 5 is treated seriously and it shows that if anyone wanted to attack Poland, it won’t be a soft landing for that entity,” Duda said, referring to the NATO rule of collective defense.

However, Duda said he did ask Trump to not lower the total number of American forces in Europe. U.S. troops on the continent have been a “huge guarantee” of safety since the end of World War II. Any withdrawal is “detrimental” to European security, he said.

The Air Force regularly sends aviation rotations of fighters to Poland, along with regular training exercises with the Polish Air Force. Since 2018, a small detachment of contractor-operated MQ-9s has been based at a small air base in the country’s north, though the detachment is currently forward deployed to Estonia.

The U.S. Air Force has 9,377 Active-duty troops at Ramstein Air Base and nearly 4,000 more at Spangdahlem Air Base in Germany. Trump did not say what forces would leave Germany or which base in Poland they will move to.

The expected reduction in Germany has prompted harsh opposition on Capitol Hill from both parties.

House Armed Services Committee ranking member Rep. Mac Thornberry (R-Texas) and 21 other Republicans sent a letter to Trump on June 9 urging him to reject proposals to reduce the U.S. presence. “We strongly believe that NATO allies, such as Germany, should do more to contribute to our joint defense efforts,” states the letter. “At the same time, we also know that the forward stationing of American troops since the end of World War II has helped to prevent another world war and, most importantly, has helped make America safer.”

“I am concerned that significantly reducing the United States military footprint in Germany may do more to harm to the national security interests of the U.S. and our NATO allies and partners than it will to incentive Germany to contribute more to our collective security,” ranking member Rep. Michael McCaul (R-Calif.) said in a release.