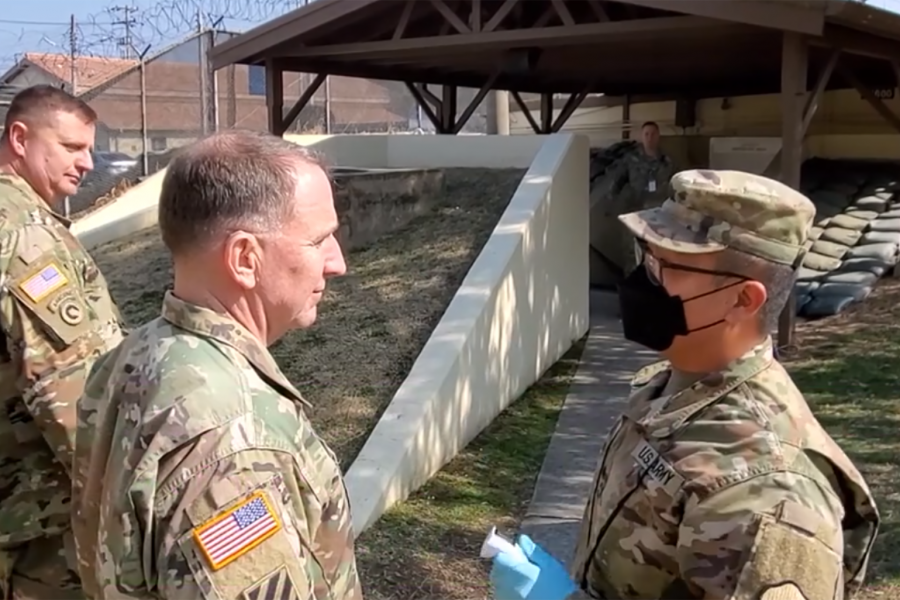 Nine people affiliated with U.S. Forces Korea have tested positive for the COVID-19 virus, including one service member and two dependents of Active-duty personnel, the organization’s commander said March 13.

The two latest cases include a Burger King worker and a contractor working on new family housing. All nine people live off base, according to USFK boss Army Gen. Abe Abrams.

USFK has been monitoring COVID-19 around the clock with a full operations team since Jan. 27. Abrams praised the organization’s ability to suppress the virus’s spread even as it continues to infect others across the globe. More than 125,000 people had confirmed cases as of March 12, according to the World Health Organization.

At its peak, USFK quarantined 77 people who had traveled through mainland China, where the virus originated. Nearly 400 people put themselves into self-quarantine because of possible exposure at the height of the precaution, but that number has dropped to 55 as concerns shrink. Abrams said the number of people in quarantine has fallen over the past two weeks.

More than 145 USFK-affiliated personnel have been tested for COVID-19 through the South Korean government and the U.S. military’s in-house tests so far. About 58,000 people interact with USFK daily, Abrams said.

The organization has banned all but official business and travel, canceled school and after-school programs, and stopped meetings, formations, and training larger than 20 people. Cleaning is constant and quarantines ongoing while people await the results of others’ tests. USFK plans to rely on a 10-day stock of medical equipment and supplies if needed.

Bars and clubs are off limits, and Abrams said installations are screening incomers with temperature checks and questions about their whereabouts. The number of people coming into USFK facilities has dropped by 60 percent as non-essential employees begin to telework.

“If anyone is dishonest, and we find out later, I have the authority to bar them from the installations and have done so in one case already,” Abrams said.

Abrams himself worked from home when he recently wasn’t feeling well, but said he didn’t contact doctors because he felt better the next day. He was not tested for COVID-19.

USFK hasn’t seen the same level of local transmission as its host country, which has tallied more than 7,800 cases so far, according to WHO data. But “we are not out of the woods yet here in Korea,” Abrams said.

Health protections have changed how the military runs its Korea-based operations center that tracks daily actions like North Korea’s recent missile launches. It’s not feasible to move each chair several feet apart to protect people, Abrams said, so they are instead screening personnel before entering the ops center, limiting the number of people allowed in, routinely disinfecting surfaces, and trusting that everyone is obeying the rules.

“Same goes with our aircrews,” he said. “We’re still flying, we’re still training, we’re still shooting gunnery, we’re still qualifying our weapons, we’re still conducting maneuver training. … There’s ways to work around it, but you have to go to some extraordinary measures to ensure it’s safe for everyone.”

He noted that North Korea, where hundreds of people are thought to have died and thousands quarantined as a result of the virus, appeared to put its military on lockdown for about a month. The dictatorship did not fly an airplane for 24 days, Abrams said, but has resumed training sorties.

Public health precautions could also strain USFK personnel as the U.S. and South Korean governments negotiate an agreement to pay the American military more for stationing troops on the Korean Peninsula. If they don’t come to an agreement, Korean workers at U.S. bases there could be furloughed starting April 1. Another round of negotiations will take place in California the week of March 15, Abrams said.

Abrams said he is authorized to keep portions of his workforce to maintain public health and safety and provide a minimum level of combat readiness. The furlough shouldn’t cause any short-term concerns about USFK’s ability to deal with COVID-19, he said, but he has talked to the Pentagon about the possible long-term effects of managing the pandemic with a smaller staff.

He added that the current order to stop troops from traveling will cause a boom in the number of people who need to leave South Korea in May, when the travel ban ends. Those personnel are added to the regular flow of troops in and out of the country later this year.

“We’ll have quite a few service members stacked in the queue, so we’re going to have a bulge competing with all the inbounds and normal outbounds for the months of May and June,” Abrams said. “I’ve provided my recommendations back to the building for some additional resources to be able to retain some additional Korean nationals, to be able to mitigate the effects of that bulge that we did not properly plan for and predict.”