Skip to content
According to an Aug. 15 post on Twitter, "This morning, the President and Vice President met with their national security team and senior officials to hear updates on the draw down of our civilian personnel in Afghanistan, evacuations of [special immigrant visa] applicants and other Afghan allies, and the ongoing security situation in Kabul." White House photo.
Expand Photo 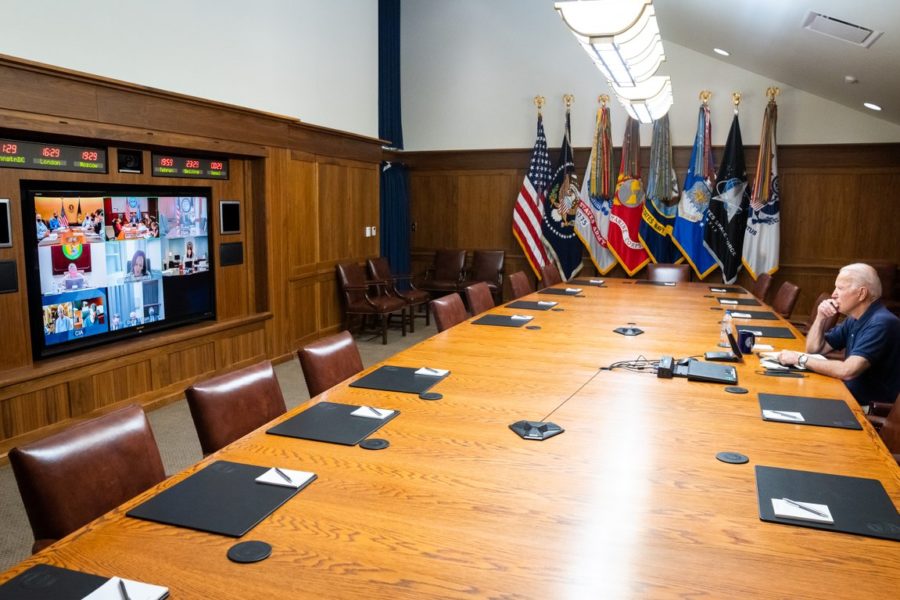 U.S. Rushes to Evacuate Personnel as Taliban Takes Over Kabul

U.S. and coalition air crews rushed to evacuate personnel from Kabul as the Taliban entered the Afghan capital Aug. 15, completing the group’s rapid takeover of the country and forcing the now former president into exile.

USAF airlifters, along with those of other NATO nations, carried personnel out of Afghanistan as the State Department warned Americans to shelter in place, with the city’s airport reportedly taking fire. The U.S. Embassy in Kabul said in an alert, “The security situation in Kabul is changing quickly including at the airport.”

Afghan President Ashraf Ghani reportedly left the country earlier in the day. The Taliban took over the presidential palace in Kabul.

U.S. helicopters repeatedly ferried personnel from the sprawling embassy complex in the middle of the city to the airport, where State Department staff and the military coordinated evacuations. The American flag was reportedly taken down at the embassy the afternoon of Aug. 15.

Open-source flight tracking websites showed many successive USAF airlifters, mostly C-17s, along with tankers flowing into Afghanistan from bases in the Persian Gulf.

The United Kingdom Ministry of Defence said it had deployed an air assault brigade and aircraft to Kabul to evacuate British nationals amid the worsening situation.

The rapid Taliban advance into the city accelerated U.S. plans announced just days before. The Pentagon on Aug. 12 had announced it was deploying thousands of troops to Kabul to protect U.S. diplomats as part of the drawdown. Then on Aug. 14, President Joe Biden announced he was increasing the number of troops heading to Kabul “to make sure we can have an orderly and safe drawdown of U.S. personnel and other allied personnel, and an orderly and safe evacuation of Afghans who helped our troops during our mission and those at special risk from the Taliban advance.”

Biden said he warned the Taliban that any attack on U.S. personnel would be met with a “swift and strong U.S. military response.”

“Over our country’s 20 years at war in Afghanistan, America has sent its finest young men and women, invested nearly $1 trillion dollars, trained over 300,000 Afghan soldiers and police, equipped them with state-of-the-art military equipment, and maintained their air force as part of the longest war in U.S. history,” Biden said. “One more year, or five more years, of U.S. military presence would not have made a difference if the Afghan military cannot or will not hold its own country. And an endless American presence in the middle of another country’s civil conflict was not acceptable to me.”

Pentagon spokesman John F. Kirby on Aug. 12 said the U.S. airlift capacity would be able to fly out “thousands” per day, but the advance of the Taliban meant the pace of operations would accelerate.

“This is a temporary mission with a narrow focus,” Kirby said. “We certainly anticipate being postured to support airlift as well, for not only the reduction of civilian personnel from the embassy, but also in the forward movement of special immigrant visa applicants.”