Skip to content
Maj. Taylor Todd completes a pre-flight checklist on-board a C-21 prior to take off for a training flight at Scott Air Force Base, Illinois, on Dec. 17, 2018. Air Force photo by Senior Airman Daniel Garcia.
Expand Photo 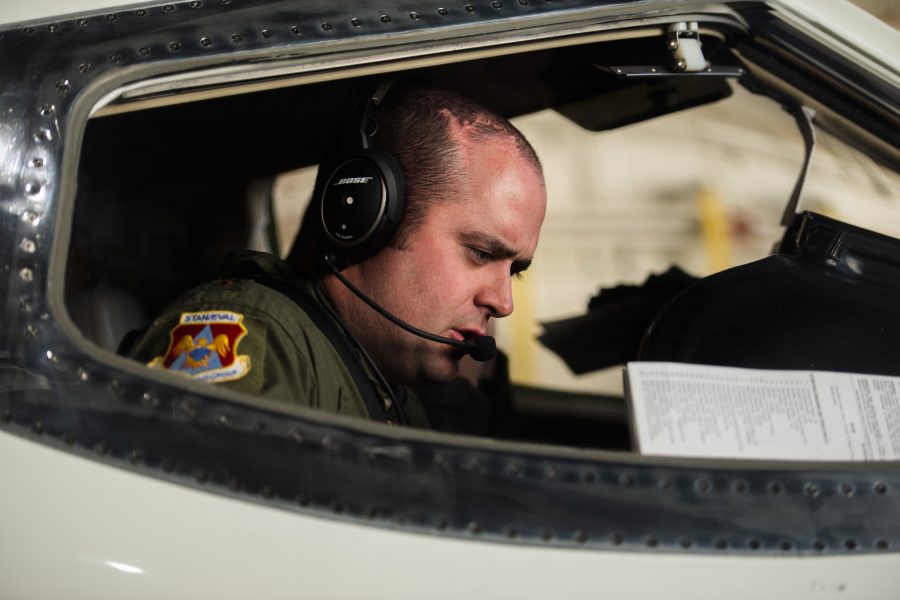 Gray tail airlift continue to fly globally, including support for civil authority missions such as bringing COVID-19 test kit swabs back to the U.S. and airlifting field hospitals throughout the country to help respond to the outbreak, Lyons said March 31. Airlift crews have stayed “very, very isolated” through their missions. While they can’t practice social distancing in a cockpit, aircrews are isolated before missions, and they go straight from their aircraft to their billets once arriving at a base. They even have their food delivered to them once in lodging, he said.

“That’s how we mitigate moving to countries that are Level 3,” Lyons said, referring to the Centers for Disease Control and Prevention classification for at-risk locations. “They never leave base, and even inside the base they are very, very controlled. That’s the way we’re managing that.”

For now, mitigation steps seem to be effective, with COVID-19 positive cases in the airlift community in the “single digits,” Lyons said.

“We are mission ready,” he said.

Scott Air Force Base, Ill., also is taking steps to protect its aircrews from the ongoing pandemic. The base is experimenting with the use of so-called “hard crews” to minimize aircrews’ risk of becoming exposed to the new coronavirus while carrying out flying duties, 375th Air Mobility Wing Vice Commander Col. Joseph Meyer said in a March 25 interview with Air Force Magazine. Since Meyer is “currently on orders as the wing commander,” he’s also in charge of guiding the installation-level COVID-19 response.

The hard crew concept, as laid out by Meyer, is pretty simple: For the extent of the pandemic, aircrew members are teamed up so that “when they fly, they fly together, and so that way, we sort of limit our exposure.”

“We are, not just here at Scott, but I would say across the Air Force, trying to implement smart measures like that … [to limit] exposure … and taking that precautionary, preventive posture,” Meyer said.

The base is trying to use hard crews across all four of the base’s flying missions, but it’s the most challenging for aeromedical evacuation, which has a larger crew size and may require crews to tag-team with outside health professionals, Meyer said.

Similarly, TRANSCOM is experiencing mission-specific challenges to its virus-mitigation efforts.

Last weekend, a USAF crew flew an infected patient from Camp Lemonnier, Djibouti, to Landstuhl Regional Medical Center in Germany using an air ambulance. TRANSCOM also has the Transportation Isolation System that was developed during the 2014 Ebola outbreak.

This is an effective, yet limited capacity, within the Air Force, Lyons said. Going forward, TRANSCOM is working with scientists in the Air Force and the Defense Threat Reduction Agency to study how particulates move through a C-17 and what potential impact there could be on aircrews “to see if we can indeed move more COVID positive patients without isolation,” Lyons said.

Air Force Materiel Command is looking at pods that can be transported in the airlifter to keep COVID-19-exposed personnel isolated from flight crews. “We need to … make sure we’ve got ways to transport COVID-19–positive people without putting anybody else at risk and make sure we can safely do that in our aircraft,” AFMC boss Gen. Arnold Bunch told Air Force Magazine. “We’re sending people TDY to execute the tests, get this qualified and airworthy on the C-17 as quickly as we can, and looking at other things that may be able to fill that role as well.”

Although the Air Force has done some passenger movement in response to the outbreak, much of the repatriation flights from abroad have been on contracted civil reserve air fleet aircraft.

Last week, TRANSCOM was ordered by Defense Secretary Mark Esper to help the State Department’s Repatriation Task Force to contract these aircraft to bring Americans and lawful permanent residents home because of travel restrictions. The first flight under this construct, which is scheduled for April 2, will bring 150 passengers home from Nigeria. Other similar missions are being scheduled, largely in Central and South America, Africa, and Indo-Pacific nations.

Editorial Director John A. Tirpak contributed to this report.