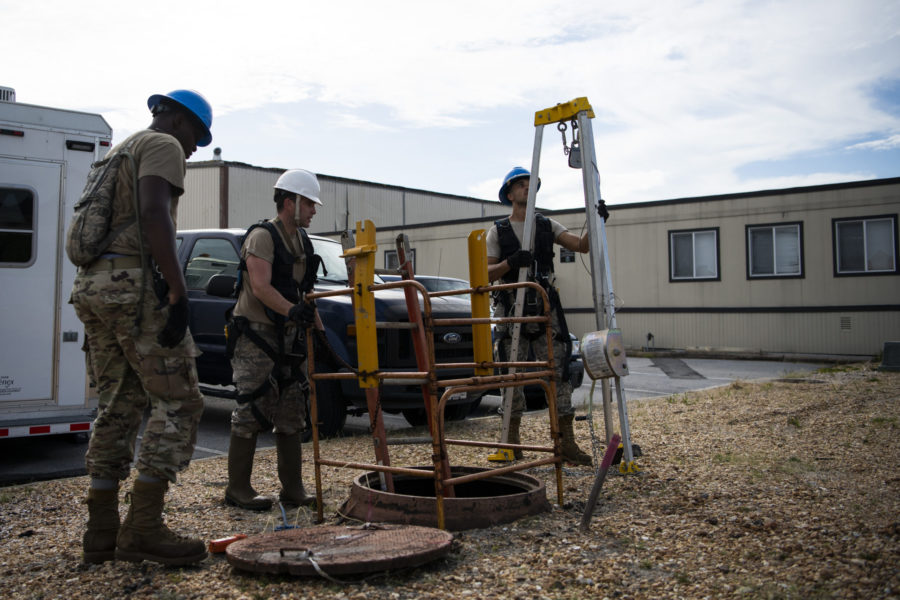 Lawmakers should expect a “significant” increase in the Department of the Air Force’s military construction funding request, Brig. Gen. William H. Kale III told House appropriators May 19, with particular investment in new nuclear modernization and improved facilities in Europe and the Indo-Pacific.

The deputy chief of staff for logistics, engineering, and force protection did not disclose details ahead of the expected May 27 budget release, but he did outline the department’s priorities:

The Air Force’s military construction request plunged in fiscal 2021, falling from $5.3 billion appropriated in 2020 to just $1.4 billion requested the following year. Now the cycle will reverse itself, he said.

“The DAF expects the FY22 program to return to a level similar to funding requests from previous year,” wrote Kale and Jennifer L. Miller, acting assistant secretary of the Air Force for installations and energy, in written testimony to the House Appropriations military construction and veterans affairs subcommittee. “This return to previous funding levels will support the DAF’s commitment to fulfilling National Defense Strategy requirements and posturing for the future high-end fight.”

Miller and Kale acknowledged that the department “accepted risk in installation investment” in the past in order to “prioritize to the most critical needs.” As a result, facilities atrophied. Now the department faces a $30 billion maintenance and repair backlog. More than 1,500 facilities are rated poor, based on a Building Condition Index of 55 or less out of 100. These require “significant investment,” according to testimony.

“If left unchecked, the condition of infrastructure will impact the Department’s ability to safely and effectively execute our mission,” Miller and Kale wrote.

House Appropriations military construction and veterans affairs subcommittee Chairwoman Debbie Wasserman Schultz (D-New York) said she had personally witnessed “atrocious conditions,” citing “airplane hangars being held together with duct tape and coat hangers; doors that are about to fall off.”

Kale acknowledged that some facilities are in “poor condition” but emphasized that the department is “trying to do our best with the resources that we have.”

Neglected USAF facilities are less able to withstand the effects of severe weather, such as the flooding at Offutt Air Force Base, Nebraska, in 2019, and near complete devastation of Tyndall Air Force Base, Florida, following Hurricane Michael in 2018.

“During recent severe winter storms across the United States … degraded facility systems and components failed, which caused water and fire suppression liquids to freeze, expand, and eventually burst the pipes,” they wrote.

Many facilities do not meet upgraded modern building codes and have been “subject to longer term deferred maintenance,” according to the prepared testimony.

Last year, the department published a “playbook” aimed at giving installation planners a “consistent and systematic framework to screen for severe weather and climate hazards and assess current and future risks,” according to testimony. Since then, the service has completed an initial assessment of all major installations and will incorporate the results into plans in the coming years. The department also has completed 24 Installation Energy Plans “to identify risks and track and adjust requirements to advance energy and water resilience goals,” according to testimony. It plans to complete another 20 this year.

Sen. Martin Heinrich (D-New Hampshire), chairman of the Senate Appropriations military construction and veteran affairs subcommittee, said May 19 that the U.S. has spent $8.5 billion to repair military facilities damaged by a half dozen natural disasters since 2018. That’s nearly four times the $2.4 billion spent for the same purposes in the previous two decades combined. “More than 70 percent of [the $2.4 billion] was attributable to just one storm, hurricane Katrina back in 2005,” Heinrich noted.

Mark A. Correll, deputy assistant secretary of the Air Force for environment, safety, and infrastructure, told the Senate subcommittee that the USAF has a “holistic” plan to update infrastructure and “enhance resiliency” over the next decade by “proactively” upgrading facilities when possible, demolishing “failing facilities,” and improving “processes, such as standardizing building codes, for increased efficiency.”

“The DAF has seen the impacts natural disasters and severe weather can have on installations,” Correll wrote in written testimony. “… We continually learn from these events and adapt to meet current and future threats to our installations.”