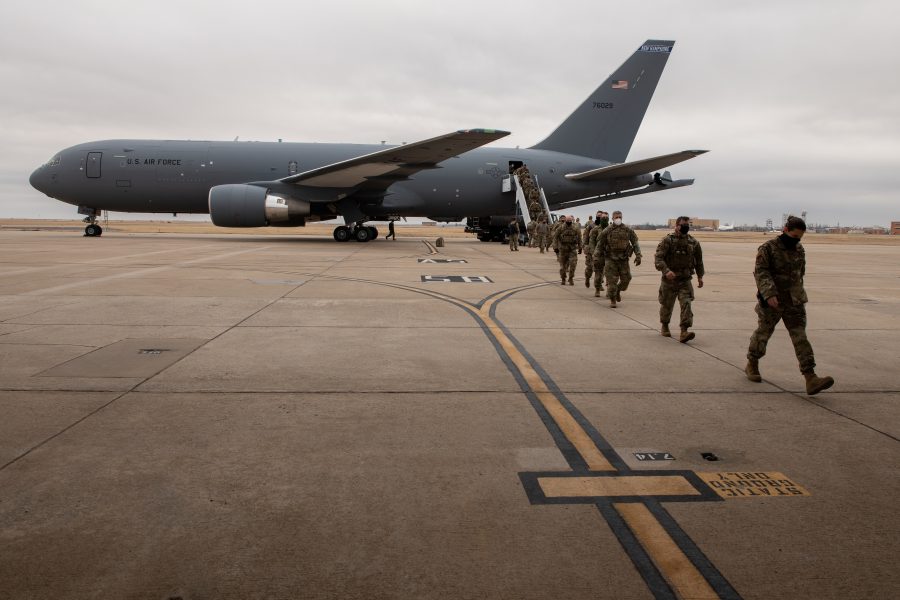 The Air Force recently resolved two Category 1 deficiencies on the troubled KC-46 tanker, both problems with the aircraft’s auxiliary power unit that could impact the safety of flight. However, the four remaining issues are still years away from being solved.

The KC-46’s APU, located in its tail, developed two serious problems, one with a duct clamp that was moving excessively and another with a drain mast on the outside of the tail that could potentially break loose. As of the end of January, both problems have been addressed, with one closed and the other downgraded to a Category 2, or less serious, deficiency, AMC boss Gen. Jacqueline D. Van Ovost told reporters Feb. 1.

Boeing engineers developed a fix for the duct clamp problem, tested it, and now about 70 percent of the fielded KC-46s have been retrofitted, with the rest to be fixed “very shortly,” she said. The correction is similar to an approach Boeing used to address like-issues on other aircraft.

“We’re confident that the clamp fix is the final fix based on their experience with the commercial aircraft and how they did the redesign on that,” she said.

For the second problem, there were quality issues with a spot weld on the part, meaning it could potentially break loose. Boeing redesigned it, and is working through a retrofit option. A final fix for the deficiency is in the works and it will remain a Category 2 problem for now, the company said in a statement.

“All of the airplanes that are flying right now and doing our testing, they all have that modification and everything seems to be going well,” Van Ovost said.

Of the four remaining deficiencies, three have to do with the aircraft’s remote vision system and one with the refueling boom itself. Boeing and the Air Force announced in April 2020 they had reached a deal on the redesigned remote vision system, known as RVS 2.0, with final selection of the fix in the works. The Air Force expects the updated RVS to begin to be delivered in 2023, with the fix added to the production line the following year. Boeing will address the “stiff boom” deficiency by installing a redesigned actuator to the boom itself beginning in fiscal 2024.

The Air Force has received 42 KC-46s at four operating bases, and the Total Force aircrews are integrating the aircraft as much as possible. Multiple KC-46s are deployed to Pacific Air Forces to take part in the Cope North exercise at Andersen Air Force Base, Guam, during which they will refuel F/A-18s with the drogue system and C-17s, while also providing advanced communications capabilities.

“So as we keep our eye on a fully operational and capable KC-46, we’re taking the time now with our crews who are transitioning into this airplane to learn more about the airplane and to learn about the new concepts that we’re going to be executing in that airplane so that we can become more capable to the Joint Force,” she said. “We’re going to take every effort to wring out this airplane so that it becomes fully capable.”

Because of the number of fielded KC-46s and delays to operational capability, the Air Force is slowing the transfer of aircrews, maintainers, and logistics Airmen from operational legacy tankers such as the KC-135 and KC-10 so AMC can meet the current tanker need.

Additionally, the Air Force is working with the Guard and Reserve, which makes up about 55 percent of the tanker capacity, to fund more crews and more volunteers to meet the need.

For the foreseeable future, the Air Force will only take delivery of about two planes per month even though there are more waiting at Boeing’s facilities, because of the smaller number of crews and the fact that the new tanker is not yet flying operationally, Van Ovost said.

“As we bring them on, we’re going to do our due diligence at the different bases, but for right now, I don’t need to be in a hurry to take them at a faster rate than about two a month,” she said.