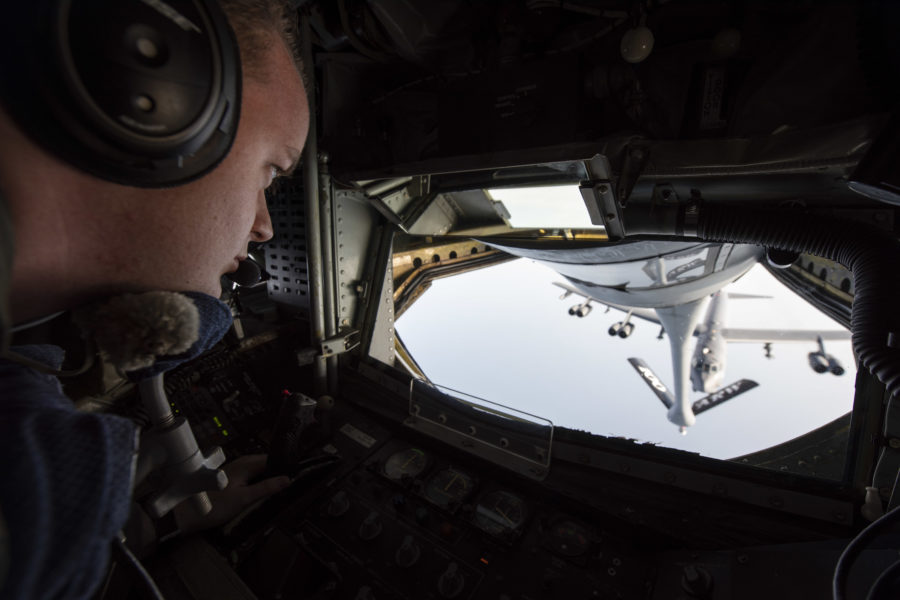 The Air Force released a new doctrine that outlines the basic tenets of airpower, how and why the service fights, and reiterates the Air Force core values of “integrity first, service before self, and excellence in all we do.”

In an email to retired and active general officers, Chief of Staff of the Air Force Gen. Charles Q. Brown Jr., said the doctrine serves as a “new cornerstone of airpower philosophy.” The updated document, referred to as Air Force Doctrine Publication 1, or AFDP-1, distills two volumes of airpower doctrine (Volume 1 and Volume 2) down to 20 pages. It highlights the critical role of joint all-domain operations, looks to empower Airmen to challenge the status quo by rapidly putting innovative new ideas into action, and makes the Air Force’s new Agile Combat Employment strategy a foundational operating concept.

Notably, the new doctrine focuses solely on the importance and role of airpower, leaving space doctrine to the U.S. Space Force—the newest military service, which falls under the Department of the Air Force. However, it notes that “all services have equities in cyberspace,” Brown wrote in the email.

“In today’s complex global security environment, victory goes to the rapid integrator of ideas. These ideas are driven by training and the distilled knowledge all Airmen bring to the fight,” Brown wrote in the publication’s introduction. “I’m relying on every Airman to innovate and incorporate concepts and technologies that will develop new best practices to shape future doctrine. We must prioritize and make difficult choices as we field a lethal, resilient, and rapidly adapting joint force. Leaders must push decisions to the lowest competent, capable level using doctrine as a foundation for sound choices.”

Brown doesn’t want the service to “reinvent the wheel” with each new contingency or operation, saying doctrine should serve as a “starting point” and all Airmen have a responsibility to learn from it and understand it.

“Doctrine is an opportunity to educate, empower, and prepare for the future fight,” wrote Brown. “It guides us but does not bind us. I’m relying on every Airman to understand the lessons of doctrine, and then draw on them to innovate and incorporate concepts and technologies that will develop new best practices to share future doctrine. This is how we solve difficult problems, make necessary changes, and how we accelerate change in our Air Force.”

The new doctrine further elaborates on Brown’s cornerstone “Accelerate Change or Lose” white paper, released shortly after he took the helm as the service’s top uniformed officer in August 2020. Like the white paper, the new doctrine acknowledges that U.S. adversaries are rapidly pushing out advanced technologies that could “reduce airpower’s ability to conduct global operations across the competition continuum, reduce freedom of maneuver, and challenge the Air Force’s ability to operate.” Brown reiterates that this new operating environment requires all Airmen to understand their enemy: how they think, plan, decide, and act across all domains.

The doctrine maintains the Air Force’s role is to provide global vigilance, global reach, and global power with the goal of defending the homeland, remaining “the preeminent military power,” ensuring “the balance of power remain in our favor,” and advancing “international order that is most conducive to our security and prosperity.”

Chief Master Sergeant of the Air Force JoAnne S. Bass said in the doctrine that Airmen are what give the U.S. a “competitive edge” over its adversaries, and Airmen are “the reason we are the world’s greatest Air Force.”

The doctrine says “Every Airman is a leader,” whether they have command or not, and every Airman has the ability to influence others and accomplish the mission. It tasks Airmen with understanding the “breadth, scope, and uniqueness of airpower,” as well as what it brings to joint all-domain operations.

Specifically, the doctrine notes that Airmen support joint all-domain operations “in, from, and through” the air domain, the information environment—which includes cyberspace—and the electromagnetic spectrum.