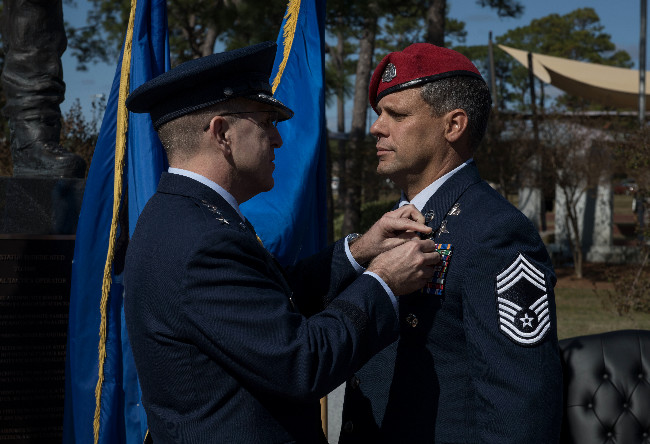 The Air Force on Nov. 15 awarded an Air Force combat controller the Silver Star for his actions in Afghanistan in November 2007, following a USAF review of Air Force Special Operations Command valor awards.

CMSgt. Chris Grove, the superintendent of the 720th Special Tactics Group at Hurlburt Field, Fla., was originally awarded the Bronze Star for his actions in the battle, but that award was upgraded following the review.

“I’m grateful that [leadership] valued the actions that day and sought out this upgrade,” Grove said in a release. “Within our formation, we are fortunate that we have those leaders, both military and civilian, that take care of our people and what they do.”

On Nov. 2, 2007, then-TSgt. Grove was assigned as the joint terminal attack controller for a US Special Forces team on patrol when it was ambushed by one of the largest Taliban offenses in the country, according to AFSOC.

The Taliban had the high ground and was using mortars, rocket propelled grenades, rockets, and heavy machine guns to attack the US team. The US forces retreated to a nearby compound for cover, where Grove exposed himself to the enemy fire to establish an observation post.

While there, Grove controlled multiple 25 mm gun runs and six 500-pound bombs from F-15Es above.

The team’s ground force commander was trapped inside a building, with enemies advancing. Grove called for a “danger-close” airstrike against enemy forces that had moved within 20 meters of their position, allowing the commander to escape, the release states.

Grove’s actions allowed for a break in contact to recover the teammate, save the lives of many US and coalition forces, and ensured no one was left behind, according to AFSOC.

“Luck is when preparation meets opportunity,” AFSOC Commander Lt. Gen. Jim Slife said at the ceremony, according to the release. “On the 2nd of November, 2007, [Grove was] the right airman at the right place, at the right time, who rose to the occasion brilliantly. Thanks for being our example of the embodiment of the American airman and a testament to the proud Special Tactics wing.”