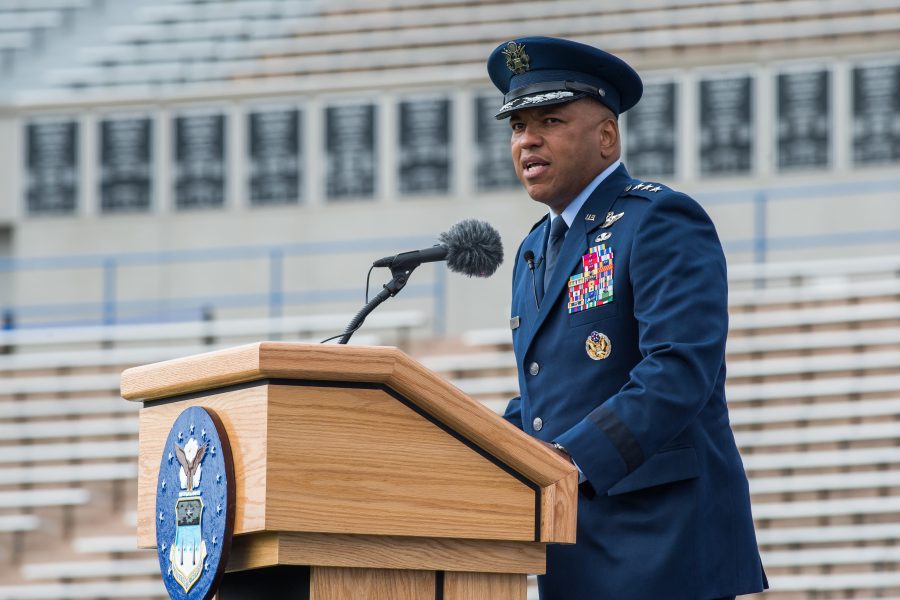 Lt. Gen. Richard M. Clark officially took over as U.S. Air Force Academy superintendent and discussed priorities for his tenure during a Sept. 23 change of command ceremony at the USAFA campus in Colorado Springs, Colo.

“Today, as I step on this field once again, it is significant because I’m honored and privileged by the opportunity to give something back to the school that has given me so much, and it is my goal to prepare every cadet to make their dreams come true, just as my dream is coming true today,” the 1986 USAFA alum said in his first address as superintendent.

Clark’s assumption of command is historic for the Academy, since he is both its first Black superintendent and its first former commandant of cadets to serve in USAFA’s top role, the Academy confirmed to Air Force Magazine via email on Sept. 23.

Clark, who succeeds fellow alum and now-retired Lt. Gen. Jay B. Silveria, most recently served as the Air Force’s deputy chief of staff for strategic deterrence and nuclear integration. Silveria led the Academy for just over three years.

“You will no doubt take the United States Air Force Academy to even greater heights,” Silveria told him during the ceremony. “The position here is like no other in the Department of the Air Force, and I greatly look forward to being a prior [superintendent]. And like those before me, that were ready to help me when I called at any moment, please call me anytime, and I will be there for you.”

In his remarks at the event, Air Force Chief of Staff Gen. Charles Q. Brown Jr. called Clark “the right leader to develop the courageous officers we need to compete, deter, and win.”

“I’m confident that Rich Clark will carry forth the excellence in education, empowerment, and enthusiasm that Jay has made the USAFA standard,” Brown said.

Chief of Space Operations Gen. John W. “Jay” Raymond also gave Clark a glowing endorsement, dubbing him “the perfect leader” to help mold future Airmen and space professionals into “the bold officers” the National Defense Strategy and current fight demand, and to continue making the Academy “the institution of choice” for those who aspire to join USAF and Space Force ranks.

“I can’t think of a more custom-built leader for this job to serve as the 21st United States Air Force Academy superintendent,” he said.

Air Force Secretary Barbara M. Barrett cited Clark’s track record as an “experienced warfighter, a credentialed academic, and a proven leader,” and credited him with sparking Air Education and Training Command’s use of cutting-edge learning programs while leading the 12th Flying Training Wing and transforming “the bomber culture” during his time as 8th Air Force commander.

“Rich, you epitomize integrity, service, and excellence throughout your career, and now you will instill those fundamental values into future Air and Space Force officers,” she said. “We are deeply grateful for your leadership, and we thank you.”

Vision for the Future

Clark told the attendees he plans to keep up several “priority efforts” of his predecessor, including:

“Every class brags that they had it tougher than any other class, but I believe the bragging rights for toughness will belong exclusively to the classes who persevere and thrive during these challenging times, and the greatest character development will belong to those cadets who toss their hats in the air after graduation despite the devastation of a global pandemic,” Clark told the assembled cadets.