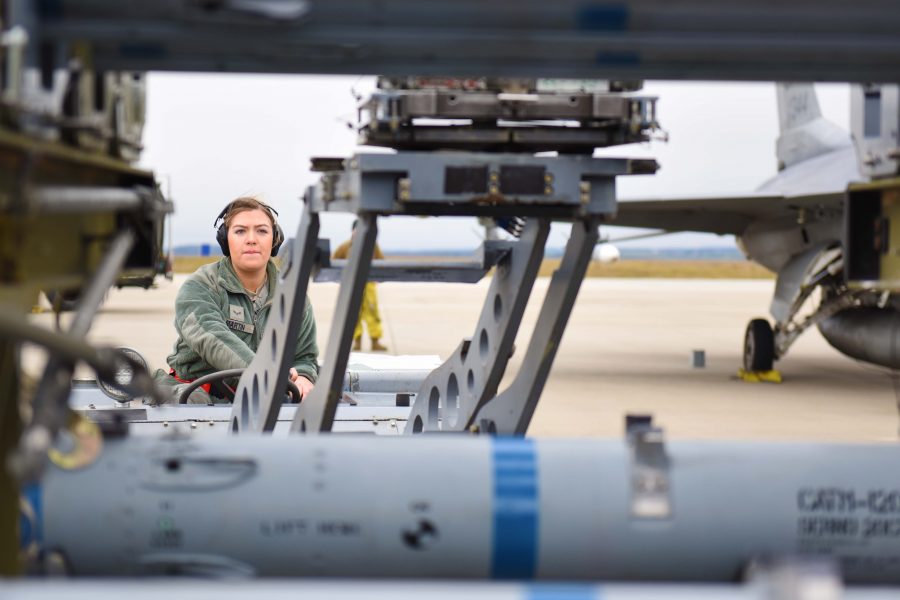 U.S. Air Forces in Europe will test its Agile Combat Employment concept of operations later this month, moving F-16s forward to another USAFE base where maintainers who typically work with mobility aircraft will apply their skills to fighter support.

“These maintainers support mobility aircraft by trade—C-5s, C-17s, and C-130s—but over the past 18 months or so they have blazed a trail toward certification to conduct servicing operations on F-15s, F-16s, and F-35s, as part of the definition of Agile Combat Employment,” according to USAFE spokesperson Lt. Col. Davina Petermann. “Together with a small contingency response team, they will be able to perform engines-on refueling of fighter aircraft at locations that wouldn’t otherwise have that kind of support.”

Pushing Airmen outside of their comfort zones is central to the ACE concept, which calls for multi-capable Airmen to be able to do more than just the narrow focus of the regular job, and it’s an idea also championed by PACAF boss Gen. Charles Q. Brown Jr., the presumptive next Air Force Chief of Staff.

USAFE and PACAF officials met recently to explore ACE concepts that can be common to both theaters, as well as those that will differ, USAFE commander Gen. Jeffrey Harrigian told Air Force Magazine on May 13. The idea is to present a one-page summary to the Air Staff detailing how the concept can be spread across the force. That paper will then drive funding decisions.

“It allows us to leverage the money in a way that allows our Airmen to reap the benefits of what we would do in a common way,” Harrigian said. This, he added, is “exactly the way we ought to be doing business”
by leveraging “the institutional effort and funding to get what the warfighter needs.”

Having Airmen who are capable of both turning an aircraft and loading munitions, for example, enables combat scenarios where the Air Force disperses forces to smaller airfields with fewer specialists. That could be remote island chains in the Pacific or remote bases across Europe, Harrigian said.

The biggest differences in the two theaters will come in logistics. Though he did not offer specifics, Harrigian said USAFE’s Agile Combat Employment concept lays out fundamentals for where the command will preposition gear and which bases it is most likely to operate from in a contingency.

This plan requires buy-in from USAF and host countries, however, which is why Harrigian started to introduce the concept to many of the NATO Air Chiefs early on.

“Just this past week, we were able to work through the necessary process to release it [the conop] to NATO and a couple other key partners in a manner that, frankly, lays out the key underpinnings of the conop and gets into a reasonable amount of detail,” Harrigian said. “That allows them to not only understand conceptually what we’re trying to execute, but ultimately for us to be partners in what I think is a very important concept of operations for us to execute here in the theater.”

While the plan provides “fundamentals,” Harrigian said wings will need to practice the concept and draw lessons from those experiences. By deploying people and aircraft, they can gain an understanding of how to best generate combat power from each location.

“While we have a good idea of what those are, we still need to put more iron on the ground at those locations and work with our partners to make sure that, logistically, it’s supportable and fundamentally allows us to execute the contract,” he said.

Planning this in the midst of a global pandemic has only made things harder, but Harrigian praised his wing commanders for finding creative solutions to continue operating. He specifically cited Spangdahlem Air Base, Germany, which was in the process of planning an ACE exercise when Defense Secretary Mark Esper issued his stop movement order. Rather than scrapping the initiative completely, the base exercised the concept locally and managed to maintain appropriate social distancing protocols.

Now USAFE is taking that idea and applying it more broadly, planning large force exercises locally to make up for potential missed training opportunities, such as Red Flag. On May 12, more than 45 aircraft—14 blue and 22 red air—from USAF and the Royal Air Force participated in Exercise Point Blank 20-02 over the North Sea. The quarterly exercise was the first large-force exercise since the coronavirus outbreak began, according to a USAF release.

Capt. Nathan Hartoin, a pilot for the 493rd Fighter Squadron and chief of wing weapons, said the exercise proved “that displaced mission planning can be executed safely and swiftly across multiple bases with minimal coordination.”

Harrigian said the aircraft took off from multiple bases in theater, rendezvoused in the air, then flew back to their respective bases to debrief.

“Even as we’re still fighting our way through COVID,” he said, “our team is continuing to enhance our readiness to ensure we’re ready to deter and defend.”