Skip to content
Air Force Gen. Glen D. VanHerck, commander of U.S. Northern Command, discusses how Northcom and North American Aerospace Defense Command, in collaboration with the combatant commands, completed the third in a series of global information dominance experiments during a press briefing at the Pentagon. Screenshot
Expand Photo 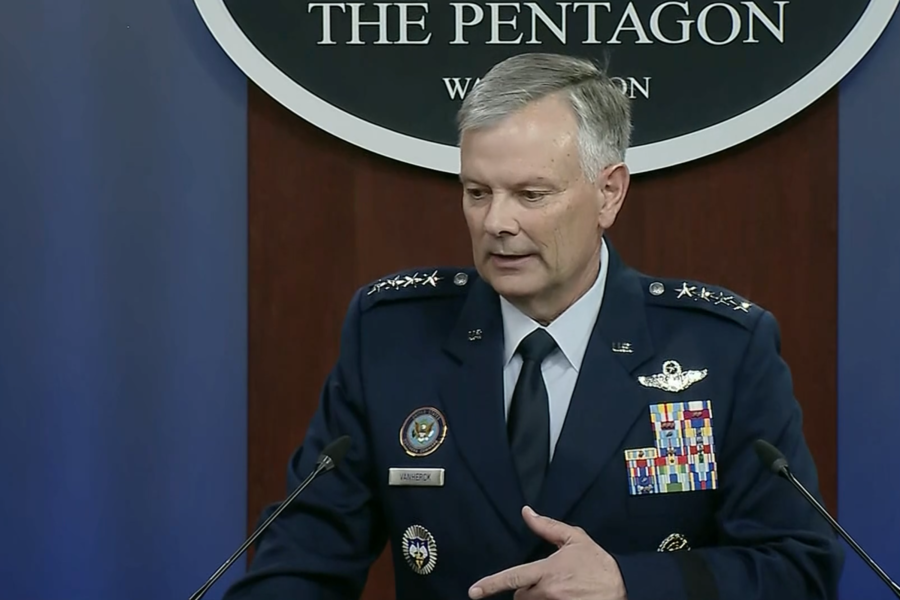 “We rely on Space Command sensors and capabilities for our threat warning, our attack assessment, and the domain awareness that we need to conduct our mission,” VanHerck said in response to a question posed by Air Force Magazine on July 28 in the Pentagon briefing room.

SPACECOM tripled its participants in the third iteration. A SPACECOM spokesperson told Air Force Magazine that the focus in the GIDE 3 experiment was on machine-to-machine learning, artificial intelligence, and cross-domain data integration “in order to develop courses of action, provide best military advice and assessments, improve capabilities and resource allocation and procurement recommendations.”

Technology can be employed ‘tomorrow’

The experiment, the third in a series, used software technology available now to take in vast amounts of raw data and intelligence, analyze it, and provide solutions for decision-makers within seconds instead of days.

“I don’t want to be shooting down cruise missiles over the National Capital Region or in our country,” VanHerck said in offering a scenario that emphasized the importance of partners and allies and the role of combatant commands in what Defense Secretary Lloyd J. Austin III calls “integrated deterrence.”

“We’re shifting our focus away from pure defeat mechanisms for homeland defense towards earlier deter-and-deny actions,” the commander said.

In the experiment, software is given certain patterns and parameters before it processes military and commercially available data. When a dangerous pattern, such as a buildup of forces, is detected, an alert is triggered that gives the option for other sensors, such as satellite capabilities, to take a closer look in a specific location.

VanHerck said the technology is not new and can be employed “tomorrow.”

“Amazon’s been doing it this way, Google, a lot of people have been figuring out how to pool and share data and information,” he said. “What we’ve do done is take it and not approach it from a military or a capability problem, but we approached this from a data and software problem, and we stitched everything together to make this happen.”

VanHerck said assistance was also provided by the Joint Artificial Intelligence Center, the undersecretary of defense for intelligence and security’s Project Maven, and the Department of the Air Force’s Chief Architect Office, which conducted ADE 5, its enterprise-wide Architecture Demonstration and Evaluation.

The commander said policy and confidence hurdles are to be overcome before machine learning and AI can be widely employed to defend the homeland.

VanHerck, who is commander of NORTHCOM and North American Aerospace Defense Command, told Air Force Magazine that includes better informing the public that a human is always behind AI decisions. He also said intelligence must be shared more readily.

“It’s policy with regards to the use of artificial intelligence, machine learning to ensure that the data sharing is available,” he said. “We may have to make that intelligence available sooner in the future by sharing the raw data, the real-time data and allowing machines to look at that data, things that today analysts may do.”

VanHerck said another challenge is that IT infrastructure has to be “secure and reliable to execute future data and information capabilities.”

The NORTHCOM commander will brief Deputy Secretary of Defense Kathleen H. Hicks on July 29 on the experiment’s findings.

When asked by Air Force Magazine what the role of INDOPACOM was in the exercise, the commander tipped off who the competitor in the experiment might be: “We did focus to the west this time. I will tell you that, and INDOPACOM was critical to being part of the overall solution.”

“This is JADC2,” he said. “This information exists from today’s satellites, today’s radar, today’s undersea capabilities, today’s cyber, today’s intel capabilities. The data exists. What we’re doing is making that data available, making that data available and shared into a cloud where machine learning and artificial intelligence look at it. And they process it really quickly and provide it to decision makers.”