Skip to content
Adm. Christopher W. Grady, nominee to be vice chairman of the Joint Chiefs of Staff, testifies to the Senate Armed Services Committee on Dec. 8. Screenshot
Expand Photo 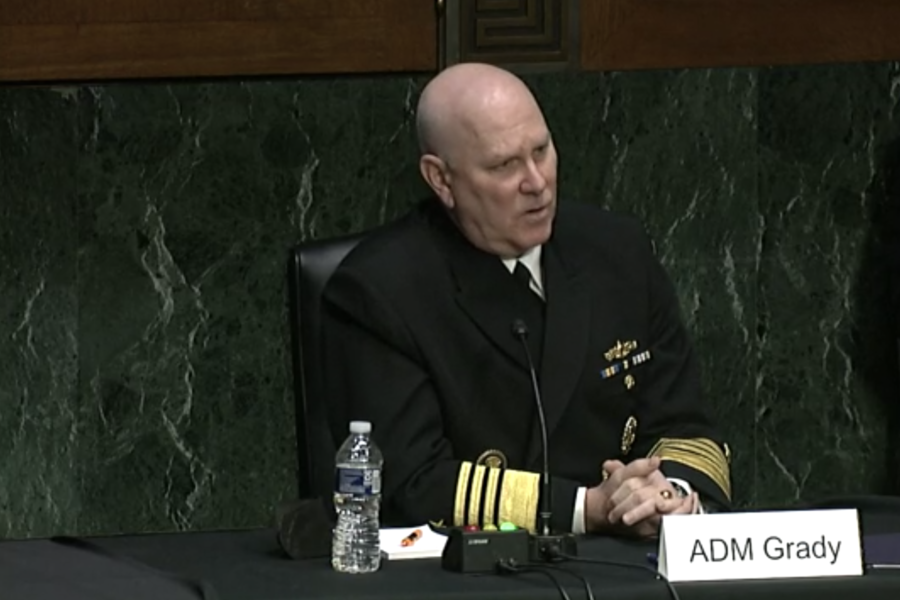 Adm. Christopher W. Grady, nominee to be vice chair of the Joint Chiefs of Staff, told Senators during his Dec. 8 confirmation hearing that the Pentagon needs to be prepared to deal with “two nuclear peer competitors,” calling China’s rapid growth of its nuclear capabilities “spectacular” and Russia’s recent actions at the Ukrainian border “very destabilizing.”

Grady, picked to succeed the now-retired USAF Gen. John E. Hyten as the military’s No. 2 officer, pointed to the U.S.’s own nuclear modernization efforts as crucial to that preparation, agreeing “absolutely” with Sen. Deb Fischer (R-Neb.) that a modernized nuclear triad is necessary.

“We need to have that responsive, flexible, and survivable triad across the three legs if we’re going to meet the challenges of two nuclear peer competitors,” Grady said.

China has garnered much of the headlines lately for its buildup of its nuclear arsenal, including hundreds of new missile silos and a test of a hypersonic orbital bombardment system. And Grady agreed with a recent assessment by U.S. Strategic Command boss Adm. Charles “Chas” A. Richard that China’s growth in the area has been a “strategic breakout” and “breathtaking.”

“I think that China’s breakout, as Adm. Richard has called it, is indeed spectacular and indeed breathtaking,” Grady said. “And so therefore, we need to be postured to address that issue. We need to think about how we would proceed with deterrence, particularly deterrence now against two peer competitors, who need to be deterred in two different ways. And deterrence, then I think, builds on that strong nuclear triad. … And so the modernization of the nuclear triad will be the underpinning of that deterrence effort against two nuclear competitors.”

Grady discussed efforts to replace the sea- and land-based legs of the triad, saying the “Ohio” class of submarines in the Navy are reaching a tipping point when it comes to their hull strength, and the Minuteman III ICBM system is becoming more expensive to maintain than its proposed replacement, the Ground-based Strategic Deterrent.

“I do believe that, as we think about GBSD and the timeline there, at a certain point, it costs more to maintain than it does to re-modernize, and we’re approaching that,” Grady said.

But it is not just the weapon systems that need to be updated, Grady said. Agreeing with a question from Sen. Angus King (I-Maine), who pointed to nuclear command, control, and communications as another area that needs to be updated and secured.

“What we see in the cyber domain across all of our weapon systems has to be addressed. And so we talk a lot about being able to defend our networks—the ultimate network to defend is the NC3 network and we’re going to have to be able to do that in cyber,” Grady said. “So if confirmed, it would be a high priority of mine to continue the momentum started to do that.”

The challenges presented by two near-peer competitors have become increasingly clear recently. Russia continues to mass troops near the Ukrainian border and fears of a potential invasion rise, as China continues to send planes into Taiwan’s air defense identification zone, raising tensions there.

Balancing those two threats, particularly with the Pentagon’s force planning construct, will form a key part of Grady’s responsibilities if he is confirmed.

“If you start with Russia in Crimea and with Ukraine, it is a very dangerous and destabilizing situation that we’re working our way through,” said Grady. “It’s important for us to ensure that we work with our NATO partners and continue to recognize the the challenges that are faced by Russian activity in that area of the world, and then remain rock solid in our commitment to Ukrainian sovereignty. …

Grady’s path toward confirmation appears relatively smooth; Multiple Senators, both Republican and Democrat, expressed optimism Dec. 8 about advancing his nomination to ensure the vice chair position is filled as quickly as possible.