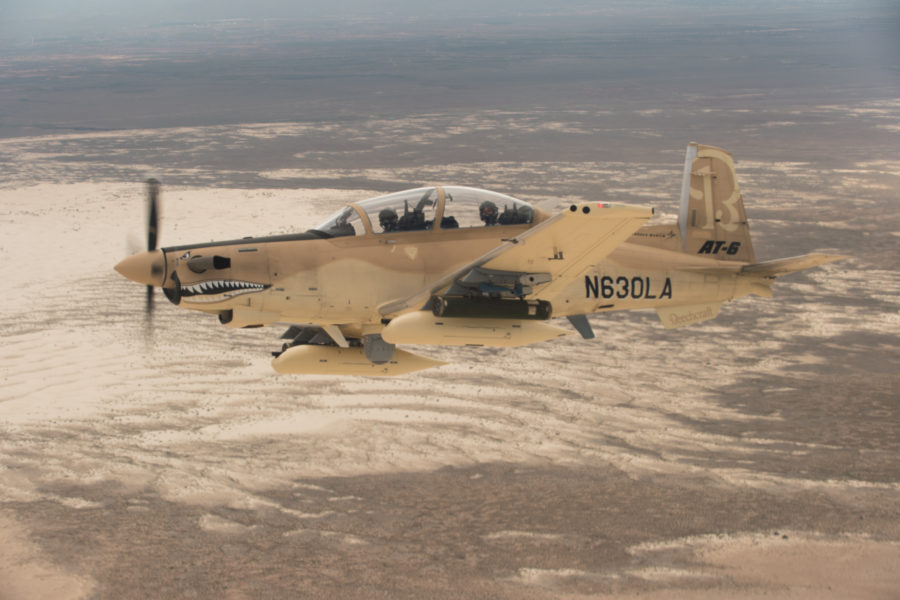 The AT-6E is a turboprop light attack/armed reconnaissance aircraft developed from the T-6 primary trainer.

Wolverine incorporates the A-10C’s mission computer, the F-16’s Hands-On-Throttle Stick, HMCS, and a digital glass cockpit with three color MFDs for integrated navigation, sensor, and weapon’s management/delivery. The aircraft can carry a wide array of air-to-ground weapons on six wing pylons in addition to a centerline-mounted MX-15D EO/IR sensor for targeting and tactical ISR. The AT-6 is equipped with LINK-16/SADL data links, real-time FMV/ROVER for integration with ground forces, and tactical VHF/UHF/SATCOMS. The type was originally proposed for USAF’s Light Attack/Armed Reconnaissance (LAAR) requirement which fell prey to budget cuts a decade ago.

The service launched a renewed effort in 2017, kicking off the Light Attack Experiment (OA-X) which evaluated rapidly procurable off-the-shelf CAS/ISR platforms to relieve pressure on existing fleets. USAF opted to procure two AT-6 Wolverines (in addition to an equal number of AFSOC A-29 Super Tucanos) to continue experimentation with a rapidly procurable, exportable, light CAS/ISR aircraft following the end of phase two trials in 2018.

The AT-6s will continue that effort, moving to Nellis to develop secure-tactical networking for U.S./ partner-nation COIN integration dubbed “AEROnet.” The first aircraft was handed over to USAF on Feb. 17, for joint-industry/USAF airworthiness certification and testing with Beechcraft in Wichita.


More articles about the AT-6 Wolverine