Skip to content
A C-5M Super Galaxy lifts off for a mission at Eglin Air Force Base, Fla., May 13. The Dover Air Force Base aircraft and crew visited the base for a series of nighttime defensive countermeasures tests on Eglin’s ranges. U.S. Air Force photo/Samuel King Jr. 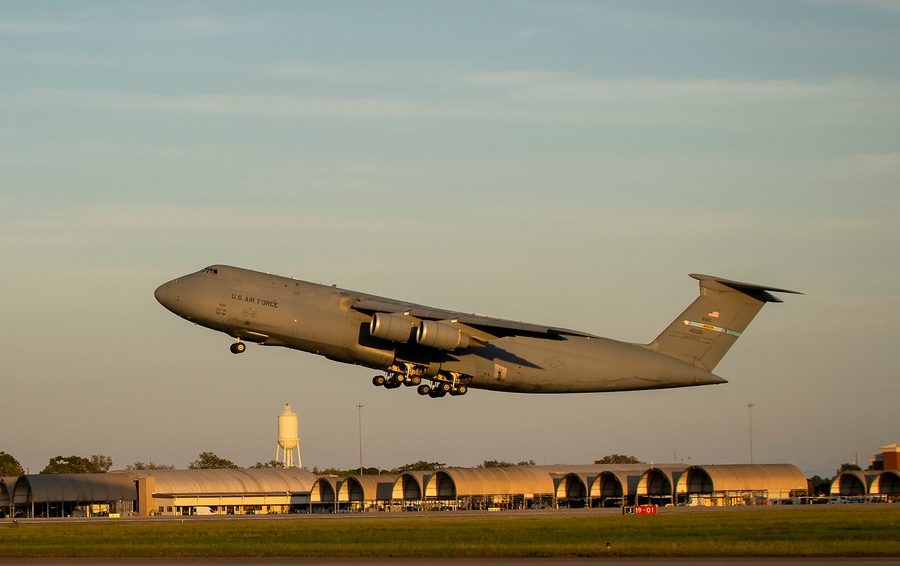 The C-5 is USAF’s largest airlifter and one of the world’s largest aircraft, capable of lifting unusually large/heavy cargo over intercontinental ranges. It is also able to take off and land in relatively short distances, and taxi on substandard surfaces if required.

The Galaxy’s front and rear cargo doors permit simultaneous drive-through loading/unloading. The aircraft’s unique upper deck is split between the flight deck with galley and crew rest area forward of the wing and a troop compartment seating 75 passengers and a second gallery/lavatory aft of the wing. The C-5A first flew on June 30, 1968, and a total of 81 were delivered between 1969 and 1973 reaching IOC in September 1970. C-5As underwent major wing modifications to extend their service lives and all but one (converted to C-5M) are now retired. The C-5B first flew in 1985 and was delivered between 1986 and 1989. C-5Bs incorporated all C-5A improvements including strengthened wings, uprated turbofans, color weather radar, triple INS, and defensive systems (on some aircraft). Two C-5As were modified for outsize space cargo and redelivered as C-5Cs in 1989 and 1990. The combined Avionics Modernization Program (AMP)—completed in 2011—and Reliability Enhancement and Re-engining Program (RERP), resulted in the C-5M Super Galaxy.

Upgraded aircraft incorporate new engines with 20 percent increase in thrust, as well as avionics, structural, and reliability fixes. A total of 49 B models, two C models, and a single C-5A were converted.


More articles about the C-5 Galaxy

Van Ovost: Time to Invest in Next Generation of Tankers, Airlifters

If Lockheed Wins KC-Y Contest, It Will Build the Planes in Alabama and Georgia

B-1B Makes First US Bomber Visit to India Since 1945

DARPA Plots Next Steps for Cutting-Edge Tech in 2022