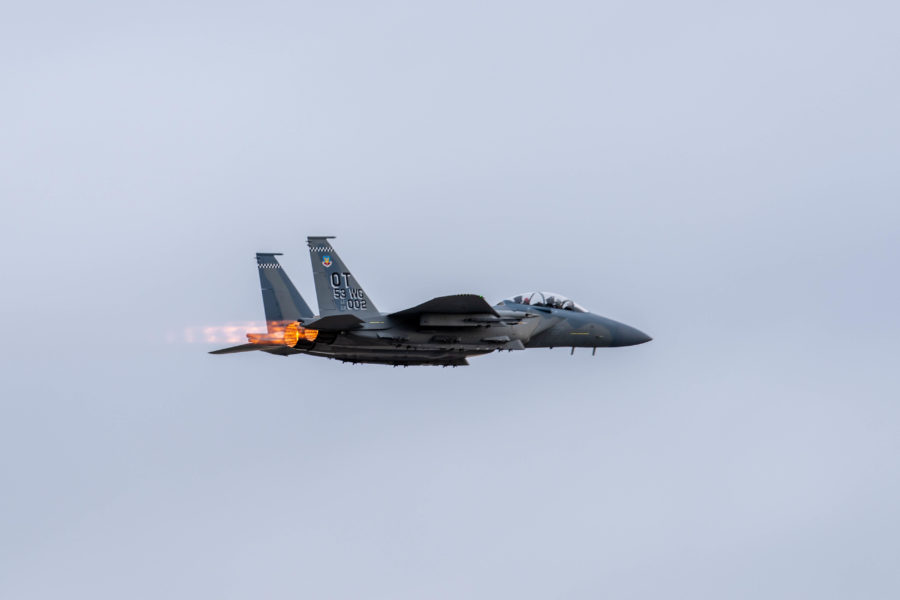 Retired Air Force Gen. Paul V. Hester was already familiar with the power and performance of the GE F110-129 engine from his time commanding an F-16 Viper Wing in Misawa, Japan. But when he arrived at Eglin Air Force Base, Fla., to take command of the 53rd Test and Evaluation Wing, it didn’t take long before the longtime F-15 Eagle pilot’s impression was greatly enhanced.

“When I got to Eglin, I inherited a program integrating the (F110)-129 engines on the F-15,” Hester said. The upgrade added 4,500 pounds of rated thrust to each engine and unrestricted throttle movement. When Hester sat in the back seat of an F-15 with the old engines and flew alongside another F-15 equipped with the F110-129 engines, the difference was apparent.

The two planes were separated by just three or four aircraft lengths at 10,000 feet at an airspeed of roughly 350 knots. “Then came the order to approach military power”—maximum speed without afterburners.

“The GE-powered airplane steadily moved out front and accelerated away from the one I was flying in,” said Hester, who went on to command Pacific Air Forces. “The difference in military power was impressive. It just put a smile on my face.”

Then the two Eagles came around and lined up again. This time, the order called for full afterburner. “And here’s where you got to notice the real difference between the two airplanes, one powered at 25,000-pound thrust and the other at 29,500-pound thrust,” Hester said. It was a significant jump in capability, and seeing that, well, I wanted to be checked out on the F-15 again!”

Now the Air Force is rolling out the newest version of the F-15, the new F-15EX Eagle II. And Hester, now retired and consulting with General Electric, says the benefits of the GE F110-129 have never been plainer.

“It’s no surprise that from Saudi Arabia to Qatar to the United States, every single one of the new advanced F-15s is powered by the GE motor,” Hester said. “When the Air Force decided they wanted to buy the EX version, they awarded the contract to GE as a sole source. But now it’s been opened for competition ,and we’re going to find out the winner, probably in the fall. The (F110)-129 is in a great position to win again.”

The first two F-15EX aircraft came equipped with F110-129 motors, and Hester argues all future EXs also should be powered by the GE engines.

“The F110-129 is the only engine in full production, fully tested, fully integrated and now delivered to the U.S. Air Force,” Hester said. “GE has worked with Boeing for years getting the engine integrated and qualified on those advanced F-15s. So now, everything the Air Force wants in the airplane has been accomplished and set in motion.”

“We were able to get higher and faster than the F-15Cs due to the GE-129 motors,” Lt. Col. Weston Turner, director of the F-15 Division at the Air National Guard/Air Force Reserve Test Center, said in a press release shortly after Northern Edge concluded. “The expanded capabilities … and enhanced avionics brought significantly increased situational awareness and capabilities to the exercise.”

Such rave performance during Northern Edge speaks to the close integration of the new systems, engines, and avionics, Hester said. It’s where the years of work integrating the engine with the advanced F-15 airframe paid off—the F-15EX participated in a major exercise just months after being delivered to the Air Force for the first time.

He added that GE has a “continuous improvement mindset” regarding the F110. Over the life of the engine, several upgrades have modernized components and reduced maintenance. Each improvement has added to readiness and reduced time in the maintenance depot. It has resulted in an engine that on average goes more than 750 flight hours on wing between shop visits and demonstrates 6,000 total accumulated cycle intervals.

Having begun his career flying twin-engine F-15s, Hester started dreaming of getting more power during his tour at Misawa flying single-engine Vipers. “I used to muse at night that if we could just put two of these (F110)-129 motors on an F-15, what an incredible jump it would be to go faster and hold Gs in the turn—all those things fighter pilots love.”

The results were even more impressive than he imagined. And with the F-15EX, the F110-129 continues to excel, Hester said: “It is the best engine I ever flew.”