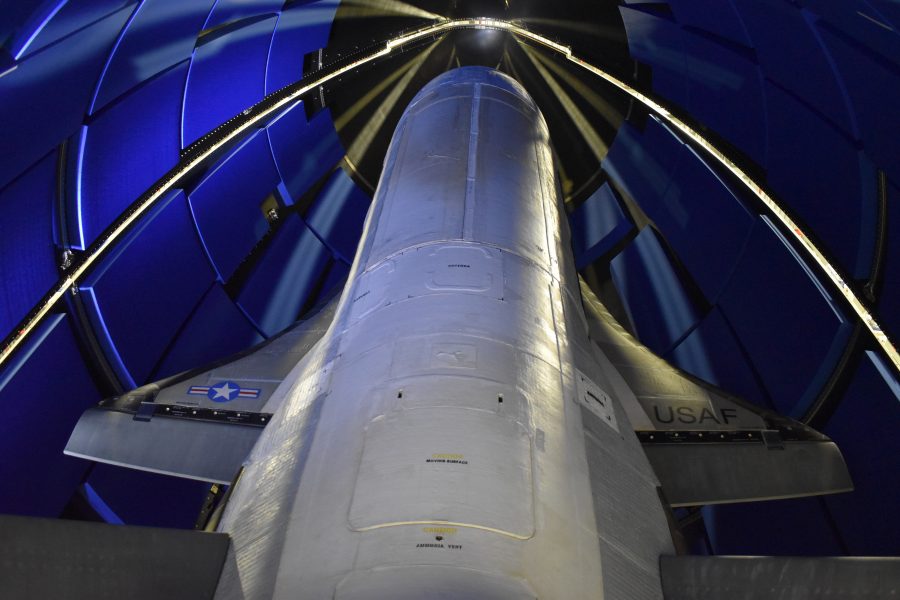 The X-37B spaceplane launched from Cape Canaveral Air Force Station, Fla., on May 17, sending the U.S. Air Force Academy’s largest batch of satellite experiments to date along for the ride.

USAFA’s FalconSat program, run with the Air Force Research Laboratory and contractor Geneva Technologies, is a hands-on opportunity to design, build, test, launch, and operate small satellites for the Department of the Air Force while still in school. FalconSat-8, which will tag along on the X-37B for the first time, is carrying five experiments onboard.

The launch was delayed one day, from May 16, due to weather.

“Anytime we can find relationships that allow us to leverage rides that are already going up, we take advantage of that wherever we can,” Col. Luke Sauter, head of USAFA’s astronautics department, said May 14. “It’s a win-win for both organizations.”

Experimental payloads include an ion thruster propulsion system known as the MEP; an antenna made of synthetic materials that offer more power in a smaller package; a carbon nanotube experiment that looks at radio frequency performance under varying stress in orbit; an attitude control and energy storage experiment; and another to vet a low-cost star camera for the Air Force Institute of Technology.

Once the dishwasher-size satellite separates from the spaceplane, cadets will monitor its performance in orbit and track how the experiments are faring. Running each FalconSat over the course of a system’s lifetime gives students a peek into a possible future job as a satellite operator in the Space Force.

“Every time the satellite goes overhead, [cadets] will most likely be making contact with it,” said 1st Lt. Megan Maikell, who worked on FalconSat-8 as a USAFA cadet and is now part of the military’s Space Test Program. “Depending on the length of the path and what’s required, it could just be a health check. It could be to train future FalconSat operators as well as, you get data and pass that along to our customer.”

FalconSat-8 has been in the works since 2016, spanning multiple years of cadets. The program provides hands-on experience and a much different challenge after three years of learning about space in classrooms. The incoming batch of astronautical and systems engineering students picks up where the previous year’s undergraduates left off.

Participation ranges each year from as few as 12 students to as many as 40 or so. Larger classes get to work on a broader range of payloads, while smaller classes focus more on a smallsat’s primary mission.

“This is a very unique opportunity for cadets to get physical interaction with hardware, you know, being responsible for coming up with test plans and procedures, and really having that level of ownership that you really don’t see even as a lieutenant in the Space Force,” Maikell said. “It … has helped me ask a lot of good questions.”

Sauter noted that the program has adopted new techniques in satellite manufacturing as the space industry grows more sophisticated. But undergrads are also trying to make up for a shrinking domestic supply of niche subsystems by creating parts themselves.

“A lot of the small satellite industrial base is leaving the U.S. and because of that, we’re having to develop a lot of these systems that we would normally buy from other places,” Sauter said. “Cadets this year were building star trackers and magnetometers and torque rods and rate sensors and all these cool subsystems.”

The next project, FalconSat X, is already in the works and will begin assembly in the coming year. It is slated for launch in the next two years.

Despite the rising interest in space, Sauter said the Academy isn’t trying to grow the program because it wants cadets to continue getting the personalized training they need.

The X-37B will also ferry experiments provided by NASA and the Naval Research Laboratory. This is the Orbital Test Vehicle’s sixth trip to space.

United Launch Alliance’s Atlas V rocket that will carry the X-37B to space is emblazoned with a tribute to those who died in the coronavirus pandemic, frontline workers, and first responders.