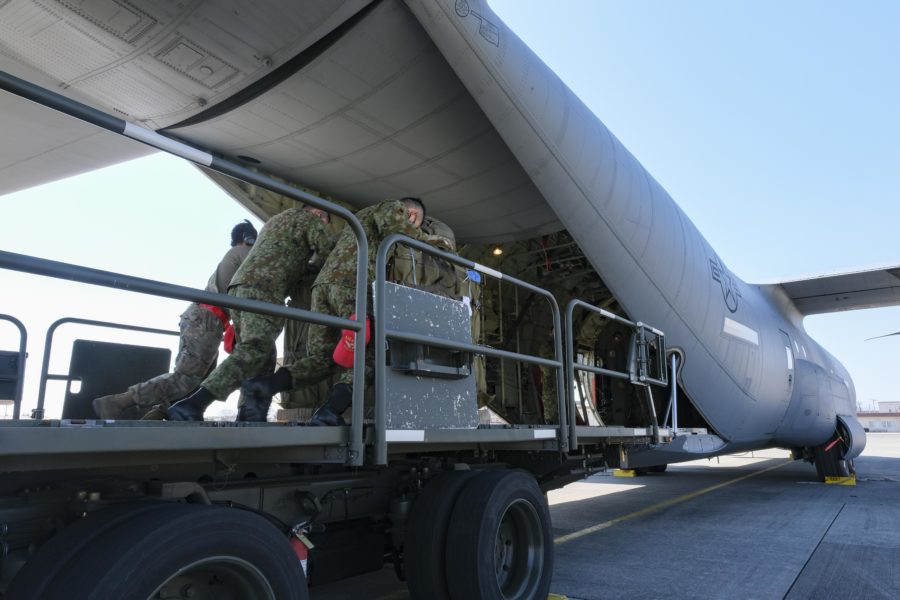 A dozen C-130Js from the 374th Airlift Wing at Yokota Air Base, Japan, supported more than 500 Japan Ground Self-Defense Force members in the “largest static-line personnel jump and cargo drop” between the two countries, according to a USAF release.

“This was not an overnight effort. To generate more than 80 percent of Yokota’s C-130J fleet required months of extensively planned logistics for the aircraft to be available, as well as planning and orchestration of the aircraft parking plan, and proper resourcing of aircraft configurations in order to make the mission happen,” said Maj. David Perkins, 374th Aircraft Maintenance Squadron operations officer, in a March 12 release.

During exercise Airborne 21, the JGSDF soldiers from the 1st Airborne Brigade jumped from the Super Hercs over the Combined Arms Training Center Camp Fuji, Japan, drop zone. USAF Airmen then dropped 134 container delivery system bundles for the Japanese troops to use on the ground.

Although the main goal of the operation was to demonstrate the JGSDF’s airborne insertion capability, the exercise also provided an opportunity to better the U.S. and Japan’s military-to-military relationship.

“This was an airlift that I’ve never seen in real life before,” said Capt. Christopher Espinosa, 36th Airlift Squadron pilot and Airborne 21 mission commander. “I’ve definitely studied it, planned and trained for it, but to actually execute at that magnitude was an incredible opportunity…”

Yokota transitioned from the C-130H to the J-models in 2018. The new fleet has increased range, payload, and speed compared to the legacy aircraft, bolstering USAF’s flexibility in the Indo-Pacific theater.