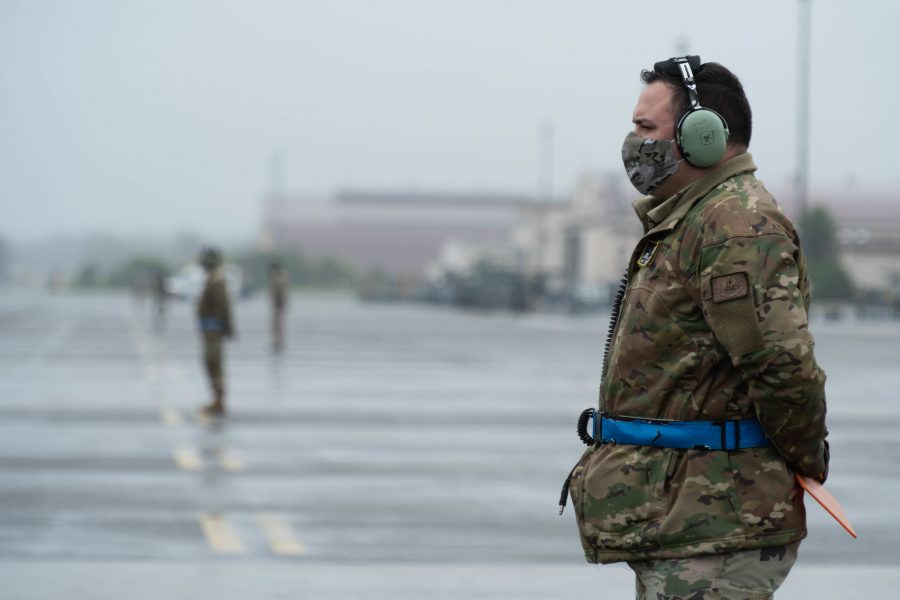 Yokota Air Base, Japan, has rolled out an extensive set of mandatory COVID-19 mitigation measures for U.S. and host-nation personnel—including mandatory contact-tracing for U.S. troops, DOD civilians, and their families.

The base is currently at Health Protection Condition Level Bravo—the second-lowest level on the HPCON scale. Here’s a look at some of the steps the base is taking to keep Yokota safe amid the pandemic.

Every military member, civilian, and dependent covered under a Status of Forces Agreement, and “local national” employee at Yokota must keep daily contact-tracing logs through March 5, 2021, a practice put in place after the commander of U.S. Forces Japan declared a public emergency in April.

These groups must maintain logs whether or not they’re currently experiencing COVID-19 symptoms or have had a known exposure to the new coronavirus.

According to the wing, a person must write a log entry if:

Healthcare professionals, “or medically trained teams,” will be the sole people to review these logs, the wing wrote.

Everyone on base at Yokota and/or Tama Hills Recreation Area must don a cloth face covering if social distancing isn’t possible, with the exception of service members’ personal homes or “while in private lodging in the defined local area,” the release stated.

Individuals must cover their faces when visiting Yokota’s commissary and base exchange, as well as “all 374th Medical Group, Security Force Squadron, and Force Support Squadron facilities” with the exception of working out in a socially distant manner in the fitness center.

However, even when exercising, personnel must keep their masks on unless they’re “actively engaging in cardiovascular exercise on a cardio machine,” taking them off for a second to hydrate, or “are in the sauna/steam room or showers,” the wing wrote.

If people who aren’t immediate family members ride together in a single vehicle, they must also wear masks, it added. However, children who are three years old and younger, as well as kids attending “child development center programs,” need not wear masks, it noted.

Further, “all personnel who wish to access” the installation or the recreation center must also wear masks when “in public, off installation in the defined local area,” the release stated. People can take off their mask if they’re exercising outside and can stay at least six feet away from people outside their immediate families or if they’re eating at a restaurant, though they must wear it when they enter and replace it as soon as they finish their meal.

“Any member declining to wear a mask in public during the period of this order and not under one of the exceptions mentioned above may be temporarily denied access to the installation or debarred,” the release stated.

All uniformed U.S. troops “whether on duty, on leave, on liberty, or on pass” need to stay within a permitted local area save for limited exceptions specified within the release, the base wrote.

Yokota’s installation commander has defined the “local area”—for COVID-19 mitigation purposes—“as the country of Japan, excluding the Tokyo metropolitan area, which is prohibited,” according to the release. All portions of downtown Tokyo are included in this ban, it noted.

Base community members who reside outside of the specified “local area” are allowed to access essential services that are in their homes’ “immediate vicinity,” the release said.

Civilians and military dependents covered under the Status of Forces Agreement are strongly urged to stay within the permitted local area. If they leave, they’ll have to complete a 14-day Restriction of Movement once they get back, the release stated.

Anyone facing extenuating circumstances may submit a travel authorization request to the first general officer or Senior Executive Service member in their chain of command, the release noted. Wing personnel and units that lack a GO or SES may seek this permission from the wing commander directly, it added.

However, if any service member or civilian employee wants to visit the Tokyo metropolitan area or any “base or installation in HPCON Charlie status”—whether on leave or non-mission-essential travel—they must get special permission.

Personnel may travel through the Tokyo metro area if they’re en route to an airport or bullet-train station there, so long as they keep their masks on the entire time, the wing wrote.

In terms of public transportation, flights that begin and end in Japan are allowed, as are visits to Japanese airports, bullet-train rides throughout the country, and taxi travel, so long as individuals wear masks “at all times with the exception of eating a meal on” a flight or bullet-train ride. Wing members may also ride local trains and buses, though the wing advised them to avoid overcrowded trains and to keep their masks on “at all times.”

U.S. Forces-Korea spokesperson Col. Lee Peters also announced the organization would raise its HPCON level to Charlie at all of its installations as of 12:01 a.m. local time on Dec. 19.

As per this decision, all but “mission essential individuals” will telework, and masks are required within all buildings on any covered installation, as well as outdoors in cases where social distancing isn’t feasible, USFK wrote on Facebook.

While the organization said “bubble-to-bubble travel” is still allowed, it urged all personnel to minimize travel within the country as much as possible, and noted that “portions of Area I, Area II including Seoul, and Busan remain off-limits except for official and necessary duties.”

Personnel will also need to obtain exceptions to policy to make Permanent Changes of Station to or from South Korea, USFK added.

“USFK will continue to monitor the current COVID-19 situation within South Korea and will make an assessment regarding HPCON Charlie on Monday, January 4, 2021,” it wrote.

In the U.S., Travis Air Force Base, Calif., on Dec. 16 raised its HPCON level to Charlie, according to a 60th Air Mobility Wing media release.

And last week, the head of the 96th Test Wing at Eglin Air Force Base, Fla., announced that the installation was going back to a “mission-essential posture,” the Northwest Florida Daily News reported, adding that the base had reached “a positivity rate of 27” percent as of Dec. 15.

As of the afternoon of Dec. 14, the Department of the Air Force had recorded 17,355 COVID-19 cases among its Active-duty and Reserve troops since the start of the pandemic. As of Dec. 15, there were nine active COVID-19 cases at Yokota, though there had not been any new positive cases “in the last four days,” according to a post on the base’s Facebook page.

Editor’s Note: This story was corrected at 9:16 a.m. on Dec. 21. The commander of U.S. Forces Japan declared a public health emergency in the region in April 2020, and the mitigation measures have been in place since then. The base issued a press release in December reiterating the safety measures.